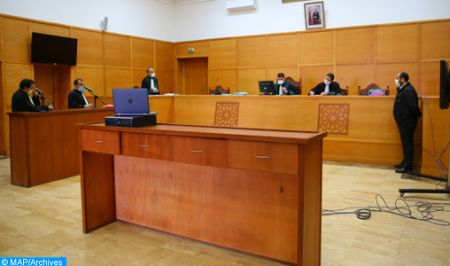 The “Amicale Hassania des magistrats” (the Association of Magistrates) has strongly condemned the statement by the spokesperson for the US Department of State on the “Justice and freedom of assembly and of the press” in Morocco, saying that the sovereignty of the Moroccan justice system is a “red line that no one should cross”. The Association said, in a press release, that its central office held a meeting on Tuesday following this statement made on the basis of “the negative reports that followed the first instance conviction of the journalist named Soulaiman Raissouni to a prison sentence, according to which the latter claims, contrary to the provisions of the Moroccan judicial system, the violation of his right to a fair trial, in addition to the follow-up by the United States of similar cases, including that of Omar Radi”. The meeting, the same source went on, was motivated by “the serious distortion of the facts contained in this statement as to the colossal efforts that the Moroccan judiciary continues to make with conviction, consistency and efficiency for the achievement of judicial security and the strengthening the confidence of citizens in the justice system of their country, starting from the belief that justice in any country is considered a pillar of stability, security, and development and a real indicator of civilization and democracy”. The “Amicale Hassania des magistrats” also recalled its objectives and missions as a professional citizen association, whose statute and internal regulations specifically qualify it to work for the defense of the dignity of judges, the guarantee of their rights and their professional interests, the preservation of the sanctity of justice, and the consolidation of the independence of the judiciary and its protection against any harmful act. The statements of the American spokesperson are prejudicial to the Moroccan judiciary and to its independence guaranteed by the Constitution, the Law and the relating international conventions, and constitutes an offense to the feelings, the honor and the dignity of all the magistrates of the Kingdom of Morocco and all the actors of the justice sector in the country. The statement “deeply affects the confidence of the citizens in the justice system of their country, starting from the consideration that the independence of the judiciary is not a privilege or an honor given to the judge, but an obligation towards the citizen and a right which is due to him”, affirmed the press release. The association expressed “its great astonishment” that the American statement ignored the press release of the public prosecutor at the Casablanca Court of Appeal, issued on July 12, 2021, among the series of reports received by US State Department, in which the  public prosecutor presented to the public opinion exhaustive and precise explanations and clarifications on the truth of the vicissitudes of the trial of citizen Soulaiman Raissouni, prosecuted for common crimes unrelated to his work as journalist. The press release of the public prosecutor explained that the person concerned has benefited from all the guarantees of a fair trial and refuted a number of untruths and fabrications conveyed in bad faith on the part of certain tendentious and well-known parties and bodies, who adopt a categorical logic vis-à-vis human rights and certain well-defined issues, in order to put forward flagrant, empty and unsuccessful agendas, while fleeing confrontation in the courtrooms to make their pleas outside, by exploiting the right of reserve which prevents the magistrates from responding to their deceptions and lies. The only concern of these parties is “to tarnish Morocco’s image and denigrate its achievements and accomplishments at all levels, which are recognized regionally and internationally,” said the association. The independence and sovereignty of Moroccan justice, like other judicial systems, “is a red line which cannot be crossed by anyone, by virtue of the guarantees stipulated for this purpose in the Constitution and the provisions of international conventions, including the general principles of the independence of the judiciary, adopted by the 7th United Nations Congress on Crime Prevention and Criminal Justice (Milan, 1985)”, the source added. The body said that it is “absolutely inconceivable for it to comment on a case dealt with by the judiciary of another sovereign country”, noting that “each State has its own concerns and that the truth cannot be seen from a single point of view”. It also underlined the solidity of long-standing and renewed links and the quality and intensity of bilateral judicial cooperation between Morocco and the United States, recalling that the Kingdom was the first country to recognize its independence in 1777. The association announced that its central office and its members remain at the disposal of those in charge of communication at the US embassy in Rabat to shed light on any ambiguity and present all the necessary clarifications for the United States concerning Justice in Morocco, under the Constitution and within the Law.