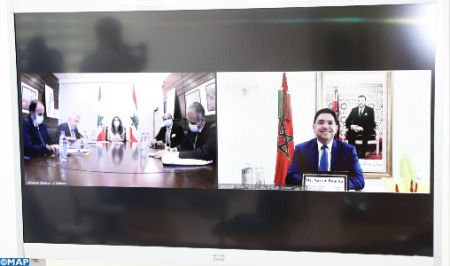 Minister of Foreign Affairs, African Cooperation and Moroccans Abroad Nasser Bourita met, Wednesday by videoconference, with Lebanese Deputy Prime Minister, Minister of Defense and Interim Minister of Foreign Affairs and Emigrants, Zeina Acar. On this occasion, Bourita welcomed the ties and relations of cooperation and solidarity uniting the two brotherly countries, highlighting the multiple initiatives launched upon the High Instructions of His Majesty King Mohammed VI, on different occasions, which confirm the importance that the Sovereign attaches to supporting security and stability in Lebanon and to help it overcome the difficulties and challenges it faces, both economically and in relation to its unstable regional environment, said a press release from the Ministry of Foreign Affairs, African Cooperation and Moroccans Abroad. The Minister noted that the Kingdom of Morocco, which is tirelessly calling for respecting the sovereignty of Lebanon, its territorial integrity and its national unity, strongly wishes that the Lebanese people, all components combined, come to an agreement in order to to make the interest of Lebanon prevail and move forward on the path of the formation of a government of national unity capable of spurring a new dynamic on the Lebanese scene and which enjoys the trust of the Lebanese people and the support of the international community. Regarding bilateral cooperation, he reiterated the Kingdom of Morocco’s readiness to modernize the legal framework and implement bilateral cooperation mechanisms to serve the common interests of the two states and the two brotherly peoples, the press release said. In this context, the two parties agreed to set up a joint consular commission to facilitate for citizens of the two countries to obtain the visa and to examine the residence and the work of Lebanese people in Morocco, the source said, noting that in the field of academic training, it was agreed to increase from 5 to 15 the number of scholarships reserved for Lebanon. For her part, Acar reiterated the thanks and great gratitude of Lebanon to HM King Mohammed VI for His initiatives of solidarity with her country, in particular medical and food aid and the setting up of a military medical-surgical field hospital following the explosion at the port of Beirut on August 4, 2020, in addition to the royal donation given to the Lebanese army and people on April 16, 2021, to enable them face the economic challenges and the repercussions of the pandemic of Covid-19, the same source added. Acar underlined, in this sense, that Moroccan initiatives for the benefit of her country do not date from today and that the Kingdom of Morocco has always supported Lebanon in its national questions since the Taif agreement, according to the same source. Regarding the issue of the Moroccan Sahara, the Lebanese minister reaffirmed her country’s position supporting the sovereignty of the Kingdom, its national unity and its territorial integrity, while rejecting any separatist entity, the press release concluded.