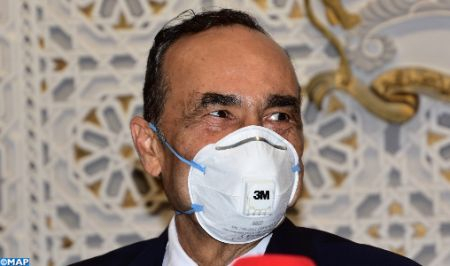 Members of the House of Representatives proposed more than 2,500 fundamental amendments to the texts adopted, of which the government accepted 740, a rate of 30%, announced Thursday in Rabat, speaker of this institution, Habib El Malki. This figure reflects the concern of members of the lower house to ensure that this institution makes its mark on legislation and interacts with a high sense of responsibility with the texts submitted to it, said El Malki at a press conference following the closure of the second session of the legislative year 2020-2021. In this regard, he recalled a number of issues raised during the exercise of legislation, including the marginalization of legislative initiatives of members of the House, namely the bills, considering that this is a “chronic” problem in the history of the Moroccan Parliament, since out of a total of 257 proposals submitted by parliamentarians during this term, only 23 proposals, or 8% of the total texts, were adopted. Thus, he called for overcoming this problem, placing the legislative initiatives of members of the House of Representatives at the center of societal debate, noting that society has the right to know more about these initiatives and to appropriate them, or even improve them with its suggestions, which is guaranteed by the Constitution as part of the implementation of participatory democracy. The second major problem, according to El Malki, is the implementation of the laws, namely the promulgation of the decrees of application of the texts of law if it is formally stipulated by these same texts. In this regard, he reviewed a battery of measures to solve this problem, including the exercise of control over the implementation of laws, the insistence that the texts are accompanied by decrees of application during discussions and the claim to the government of a timetable for the promulgation of decrees.