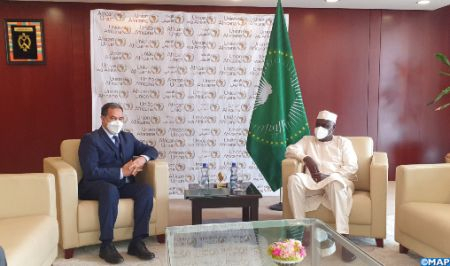 Chairperson of the African Union (AU) Commission, Moussa Faki Mahamat, highly commended HM King Mohammed VI’s active solidarity with African countries, particularly in the field of health security. During a meeting on Friday at the headquarters of the pan-African organization with the Morocco’s Permanent Representative to the AU and UNECA, ambassador Mohamed Arrouchi, Faki Mahamat stressed that this unfailing solidarity was demonstrated in the difficult context of Covid-19, which posed many challenges, both economic and social. “The AU Commission relies on the Kingdom of Morocco, whose leadership in Africa on several issues is no longer in question,” Arrouchi told MAP after the meeting. The meeting was an opportunity to highlight the noble initiatives taken by His Majesty King Mohammed VI in various fields, which affect health security, sustainable development and the new development project, said the Moroccan diplomat. All these initiatives make Morocco an undeniable leader and a major player on the African scene, he added, noting that the Chairperson of the AU Commission expressed the hope that these experiences and initiatives would serve as a model in the development project. The strong, resolute and determined support of the Kingdom for the reform process of the Pan-African Institution was also highly commended by the Chairperson of the Commission, noted the Permanent Representative of the Kingdom to the AU and UNECA. On the issue of migration, Faki Mahamat said that the African Migration Observatory hosted by Morocco will play a very important role on the African continent. Morocco also has a key role to play in the field of health security, particularly in terms of supplying vaccines to the continent at a time when the pandemic is getting worse, he stressed.