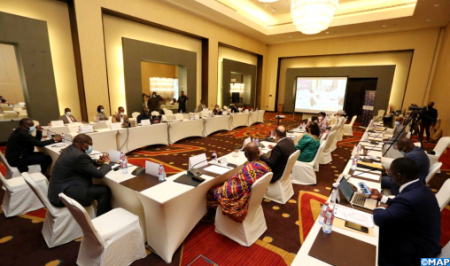 Former Liberian Foreign Minister Gbehzohngar Milton Findley has called for the expulsion of the ghostly “SADR” from the African Union (AU). “The admission of the + rasd + took place in a particular context, at a time when the continent was plagued by different ideological currents that has now become obsolete; a context recognized by the majority of AU members signatories of the Kigali motion,” said Milton Findley at a seminar held in Accra on the theme “The Imperative of Economic Recovery: How can the Resolution of the Sahara Issue Strengthen Africa’s Regional and Continental Integration?”. On the occasion of the 28th AU Summit in Kigali, the 28 signatory countries of this motion called to “act for the imminent suspension of the “SADR” from AU activities in all its bodies”, while affirming to be “aware” of the particular circumstances in which the “SADR” had been admitted, recalled Milton Findley during this event hosted by Ghanaian think tank Imani Center for Policy and Education. Through this document, which was deposited and duly registered during the Kigali Summit, these 28 countries recognize, while underlining the above-mentioned circumstances, the “illicit, anachronistic and unjustified character” of the presence of the “SADR” as a non-state entity within the AU, he pointed out. According to this former diplomat, the AU should correct its “cumbersome legacy” by establishing its neutrality on the Sahara issue, and by actively participating in the settlement of this dispute, within the framework of the UN process that the AU can actively support. The expulsion of the “SADR”, given the convergence of this decision with the need to re-engage the AU in its active, credible and impartial support for the UN, must not be considered as a taboo or unattainable objective, he underlined. “Its fulfilment is not intent on being an exclusively Moroccan ambition but one that drives African States to put an end to superfluous divisions, and to stop the instrumentalization of an organization which is supposed to serve a Pan-African ideal and goal,” said Findle. The event brought together several Ghanaian and West-African stakeholders including  prominent policymakers, experts, academics, business leaders, think tank and civil society representatives from the Gambia, Ghana, Liberia, Nigeria and Senegal. The seminar aimed to debate and discuss the African Union’s (AU) current challenges in an objective, scientific and dispassionate manner, in the context of a highly intellectual and fact-based exercise with credible experts and influential decision-makers. Accra being the host of the African Continental Free Trade Agreement’s (AfCFTA) secretariat, the discussions focused on the challenges of regional and continental economic integration, with a special focus on the role of Regional Economic Communities.