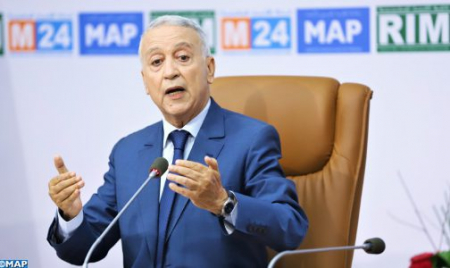 The Constitutional Union (UC) aspires to play a more important role on the political scene, affirmed, Wednesday in Rabat, secretary general of the party Mohamed Sajid, noting that this political formation enjoys an attractiveness that makes it a destination for new competent people. “Through the next elections, we aspire to play a more important role on the political scene”, underlined Sajid, who was the guest of MAP Forum, held under the theme “The Constitutional Union and the 2021 elections. … challenges and ambitions”, considering that the strengthening of the party through new competent people and the renewal of the elites are supposed to consolidate the position of this formation on the national political scene. The SG of the UC referred, in this context, to the work accomplished by the executives, groups and elected officials of the party, whether at the level of local or national institutions, and their involvement in the dynamics experienced by Morocco, noting, in this context, that the public interest takes precedence over the party’s interests. In addition, Sajid said that “noble political action is not a race for positions, but an attachment to principles and values ​​and consists of serving others (…), which is the case today within the party”. “What is happening at the UC is not a reform movement, but a healthy debate aimed at giving concrete substance to the great concepts which constitute the foundations of the party,” he noted. The next elections facing the Kingdom are exceptional, he added, saying that, for the first time in the country’s history, local and legislative elections will be held on the same day, which constitutes a transformation for their impact on the Moroccan society. He highlighted the strengthening of the presence of women within institutions, pointing out that the electoral system has given new impetus to achieve fair parity. Referring to the participation of young people, Sajid considered this category as a pillar of the national democratic edifice, noting that young people will be involved in the various elections, whether local or legislative.