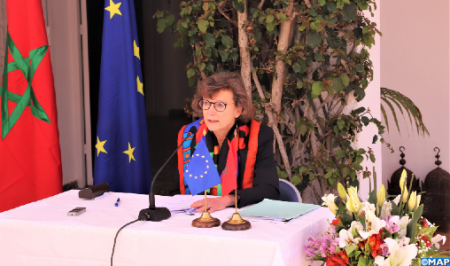 Morocco is an important ally of the European Union (EU) in the fight against cross-border crime, organized crime, drug trafficking and money laundering, EU Ambassador to Morocco, Claudia Wiedey, said on Thursday. Wiedey, who was speaking online during the presentation and launch, in Marrakech, of the extradition procedure guide, expressed the EU’s wish to further strengthen cooperation between the two parties in this area, reaffirming the commitment of the EU to support Morocco in the reform of the justice system. Highlighting Morocco’s efforts in the field of the fight against cross-border crime and organized crime through its adherence to various international conventions and bilateral agreements, the European diplomat noted that one of the priorities of the Moroccan public prosecution consists of strengthening international cooperation in judicial matters. In this context, Wiedey highlighted the global challenges relating to the internationalization of crime, adding that the response to these challenges must be international through effective and close cooperation and the conclusion of multilateral and bilateral agreements. The Presidency of the Public Prosecution launched, on Thursday in Marrakech, the “extradition procedure guide” on the occasion of a training session on the “extradition between domestic law and international conventions”. This Guide is the result of cooperation between Morocco and the EU within the framework of the Judiciary Reform Support Program.