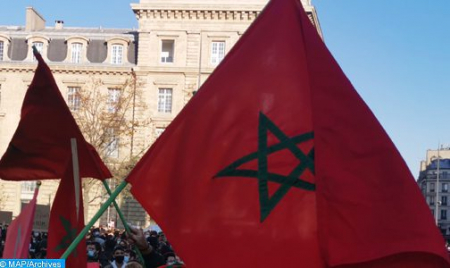 The celebration of the 22nd anniversary of the accession of HM King Mohammed VI to the Throne of His glorious ancestors was an opportunity for the Moroccan diplomatic representations in North America to organize festivities highlighting the deep ties between the Throne and the people as well as the action and leadership of the Sovereign. In New York, the Ambassadors, Permanent Representatives of United Nations Member States as well as several senior UN officials, representatives of UN agencies and correspondents of international press agencies to the UN, expressed to the Ambassador Permanent Representative of Morocco to the UN, Omar Hilale, their warm congratulations on this glorious occasion. They also paid tribute to His Majesty’s action on the world stage, praised the Sovereign’s support for the United Nations in the area of peacekeeping and praised his initiatives aimed at settling disputes in Africa, as well as his strategy in solidarity with developing countries, in the sectors of sustainable development, the environment, climate change, and the fight against COVID-19. They also underlined the leadership of HM the King in intercultural and inter-civilizational dialogue as well as in the areas of tolerance and coexistence between peoples. To this end, they instructed Ambassador Hilale to convey to the Sovereign, as well as to the entire Royal family, their best wishes for happiness, good health and long life, and their wishes for progress and prosperity to the Moroccan people. In the framework of the numerous virtual activities organized under the aegis of the embassy of Morocco in Canada, and in partnership with the consulates of the Kingdom in Montreal and Toronto, with the honorary consulates of the Kingdom in Ontario, in Alberta and in New Brunswick, as well as the Moroccan Cultural Center in Montreal and the whole of the Moroccan community established in Canada, the ambassador of HM the King in Ottawa, Souriya Otmani, made a speech on this occasion, in which she recalled the communion and the special symbiosis between the Moroccan people and His Majesty King Mohammed VI. In this regard, Ms. Otmani said that the Sovereign has always surrounded Moroccans living abroad with His high solicitude, recalling in this regard the High Instructions given by HM the King in order to facilitate the return of Moroccans living abroad to the Kingdom in order to allow them to reconnect with their families, after months of confinement and isolation following the unprecedented global health crisis triggered by the COVID-19 pandemic. The Moroccan ambassador also recalled the good relations of friendship and cooperation that exist between the Kingdom and Canada, two friendly countries and long-time partners, which are preparing to celebrate in 2022, the 60th anniversary of the establishment of their diplomatic relations. The diplomatic representations of the Kingdom in Canada, as well as the Moroccan Cultural Center Dar Al Maghrib and members of the Moroccan community living in Canada celebrated the Throne Day in compliance with health restrictions and social distancing measures due to the persistence of the pandemic. Similarly, and like last year, the famous and impressive Niagara Falls, the sumptuous CN Tower in Toronto and the famous Edmonton Bridge in Alberta were once again illuminated in the evening of July 30 with the national colors, red and green. The related ceremonies could be watched and viewed in real time in Canada, Morocco and elsewhere in the world, through electronic websites dedicated to such events. For its part, the Moroccan Cultural Center Dar Al Maghrib has prepared on this occasion a cultural program in virtual mode under the theme “Morocco, yesterday, today and tomorrow”. In Santo Domingo, the Minister of External Relations of the Dominican Republic, Roberto Alvarez, voiced, in a video message, his warm congratulations to the Sovereign on behalf of the Dominican government. In his message, the senior official highlighted the excellent bilateral relations and the historic ties binding Rabat and Santo Domingo, since December 15, 1960. The Dominican minister said that bilateral relations have experienced a significant and important development since the enthronement of HM the King, in particular in view of the numerous bilateral achievements (several agreements in various areas). He also took this opportunity to commend the several reforms implemented by the Sovereign that have allowed the emergence of a “strong, united and modern Morocco”. For its part, the Embassy of the Kingdom in the Dominican Republic commemorated this important event, through a virtual celebration and activities in Santo Domingo. Speaking at these events, HM the King’s ambassador to the Dominican Republic, Zakaria El Goumiri, highlighted the deep significance of the Throne Day and the strong bonds of fidelity between the Throne and the people. He also took this opportunity to highlight the deep ties of friendship and cooperation between Morocco and the Dominican Republic for more than sixty years and thanked the Dominican authorities for their commitment to consolidate these relations. In Mexico City, HM the King’s Ambassador Abdelfattah Lebbar was the guest of Canal Once’s news broadcaster, which covers all of Mexico and the United States at prime time. During this interview, Mr. Lebbar spoke about the symbolism of the Throne Day and highlighted the economic, social and scientific achievements of the Kingdom, under the leadership of the Sovereign. He also shed light on the approach adopted by Morocco in the fight against COVID-19, the vaccination strategy and the development of vaccine manufacturing aimed at strengthening the autonomy of the Kingdom and the entire African continent. The diplomat recalled the importance of relations with Mexico as well as the prospects for bilateral cooperation.