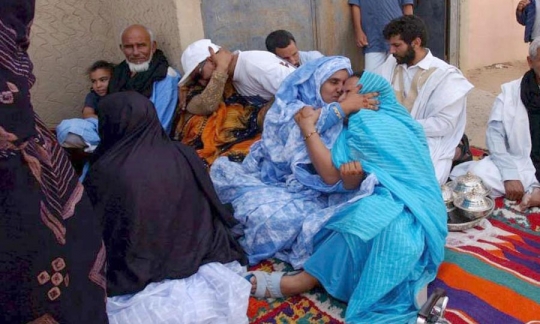 Members of a family from a major Sahrawi tribe decided not to return to the Tindouf camps after they visited Smara, within the framework of the exchange visits between separated Sahrawi families facilitated by the UNHCR between Tindouf and Morocco’s southern provinces. The family members of Biba Ould Nafae, a prominent Sahrawi notable from the Rguibat Al Bihat tribe and a former Polisario military, were visiting Smara at the same time Kerry Kennedy, President of the Robert Kennedy Center for Justice and Human Rights, and her accompanying delegation were visiting Laayoune. They said they had been deeply shocked by the delegation’s false testimonies and lies about what was actually going on in the Saharan provinces.
They also said they were very disappointed by the attitude of the American delegation which did not meet the genuine Sahrawis and militants opposed to separatism and preferred to lock itself at the place of Aminatou Haidar, an activist lavishly funded by the Polisario to sow confusion in Western Sahara and tarnish Morocco’s image abroad. “The delegation led by Kerry Kennedy met in Morocco only a ragbag of thugs and serial offenders, positioning themselves as Sahara independence militants while they actually represent nobody and nothing other than themselves in the Sahara,” argued Biba Ould Nafae, whose remarks were reported in a communiqué released by the Forum of Support to the autonomists of Tindouf (Forsatin).

According to the same source, Biba Ould Nafae got in touch with members of his tribe in the Tindouf camps and warned them about the behavior of Kennedy and her accompanying delegation. The Rguibat Al Bihat tribe members then gathered documents evidencing the widespread violations and abuses committed by the Polisario Front both at the humanitarian and financial scales that they planned to hand over to the American delegation while in Tindouf. However, the tribe members as well as all the other opponents to the Polisario were held in check by militia that prevented them from having any contact with Kerry Kennedy or members of her delegation.
Mrs Kennedy and her delegation held only few meetings with Polisario officials before packing up and leaving the Tindouf camps where they stayed less than 24 hours.
The lies and falsifications of facts by the American delegation prompted Biba Ould Nafae’s family to decide, after consultations with their tribe in southern Algeria, to definitively settle in Smara.