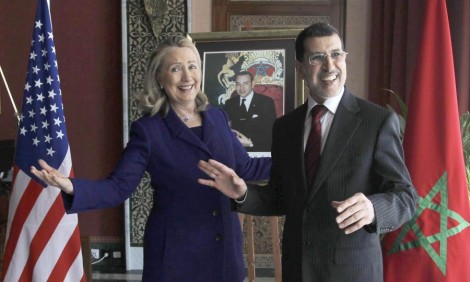 The anti-Moroccan campaign conducted with much fanfare by the Polisario leadership with the support of the Algerian media after Morocco withdrew its confidence in the UN envoy, Christopher Ross, was at the end of the day a futile uproar.
The Polisario triumphantly claimed, among other things, that the decision had ruined Morocco’s good relations with its American ally. Recent developments have however turned down all these allegations.
Rather, the relationship between the United States and Morocco, which is one of the few countries to have been designated as a major non-NATO ally, made a major stride on Thursday, September 13, when the two countries held the first session of a strategic dialogue designed to enhance further their political and economic relations. The Polisario leaders and their Algerian mentors have surely been upset to hear Secretary of State Hillary Clinton reaffirm her country’s “constant” support to the Moroccan autonomy plan for the Sahara.

“We have made it clear: the Moroccan autonomy plan for the Sahara is serious, realistic and credible,” said Hillary Clinton who was co-chairing with her Moroccan counterpart, Saad Dine Otmani, the opening session of the Strategic Dialogue between Morocco and the United States.
To make things clearer if need be, Clinton insisted that “the U.S. policy on this issue has remained constant for years.”
She explained that for the U.S. Administration, the autonomy option “is an approach that is likely to meet the aspirations of the people of the Sahara to govern their own local affairs with dignity and in peace.”
So, the United States will continue to support the UN sponsored negotiations and all efforts meant to hammer out “a lasting, peaceful and mutually acceptable settlement,” Mrs Clinton said, calling on the parties to the conflict to work in this direction.
Bottom line, the Christopher Ross case was a little cloud in relations between Rabat and Washington which faded away quickly much to the distress of the Polisario separatist leaders and their Algerian sponsors.