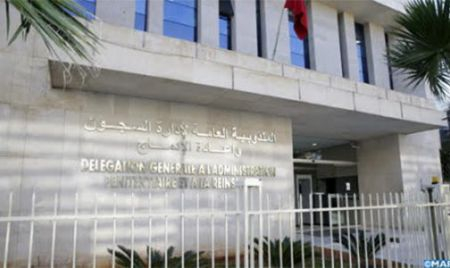 The General Delegation of Penitentiary Administration and Reintegration (DGAPR) denied on Monday the allegations made by individuals claiming solidarity with the detainee (SR), who is serving his sentence in the local prison of Ain Sebaa 1, during a sit-in staged in front of the penitentiary. In a statement, the DGAPR indicated that, in relation to the allegations according to which “the aforementioned detainee was refused access to the outpatient hospital for treatment”, that the person concerned refused to go to the hospital since June 30, 2021 and also refused to have his vital signs checked by the medical staff of the establishment. As for “his deprivation of seeing his wife and child”, the General Delegation confirmed that family visits have been totally suspended since July 19, 2021, in connection with the epidemiological situation in Morocco, knowing that the said detainee had previously refused to go out to see his wife and lawyer, on the condition of obtaining a wheelchair, while at the same time he moved normally in the premises of the prison. When this person realized that his maneuver had failed, he started walking to meet his lawyer. Pretending solidarity with the inmate by “a group of people devoid of conscience and patriotism has become a miserable staging which can no longer be used to mislead public opinion, which is now aware of the despicable aims driving them, and the agendas they implement”, according to the same source. These people know very well that the detainee himself refuses to have his vital signs checked and to be taken to the public outpatient hospital, the statement said, adding that the detainee refused more than once to receive his defense and his wife and demanded to use a wheelchair. These people act this way, while they are fully aware that it is illogical and impossible for the detainee to be able to walk on his feet after 117 days of his alleged hunger strike, noted the Delegation, stressing that the person concerned constantly refused his transfer to the hospital and the checking of his vital signs, because he knew very well that he did not stage any hunger strike in reality and that he took nutritious products on a regular basis, as the General Delegation had previously informed the public opinion.