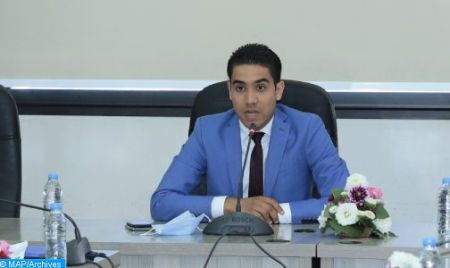 The Youth Parliament of Morocco announced the beginning, on Monday, of the opening session of the 3rd legislative session via videoconference. This session took place in the presence of the speaker of the parliament, members of its executive office, its representatives as well as several journalists, said the Youth Parliament of Morocco in a press release. Speaking at this meeting, the speaker of the Youth Parliament of Morocco, Nizar Berdai, emphasized the impact of the epidemic situation on the organization of this meeting, the press release said. After highlighting the importance of youth participation in politics, Berdai welcomed the participation of foreign delegations. For her part, Vice-speaker Zineb Ouadih stressed the role of this body in the lives of young people by calling on them to make every effort to make this session a success. This meeting, marked by the speeches of the “young ministers” of the six participating committees, plans to examine the bills modifying the laws proposed by the said committees. In this context, Imane El kioui, representative of the education, culture and communication commission, said that the bill of this commission modifies the law n° 06.00 forming the statute of private schools. For his part, Othamne Benzakour from the Committee of the Economy and Finance examined the bill amending Law No. 47.18 reforming regional investment centers and creating unified regional investment commissions. The representative of the Committee on Justice, Legislation and Human Rights, Adnane Hrioua discussed the bill relating to the use of social networks and the bill relating to the reform of the medical assistance system. In addition, the Committee for Interior, Local Authorities, Housing and City Policy, represented by Chaimaa Abad, referred to a bill aimed at supporting and creating small businesses in order to strengthen investment, it said. The Committee on Foreign Affairs, National Defense, Islamic Affairs and Moroccan expatriates discussed Bill 07.21 relating to the advocacy on the issue of the Moroccan Sahara, as the first national cause.