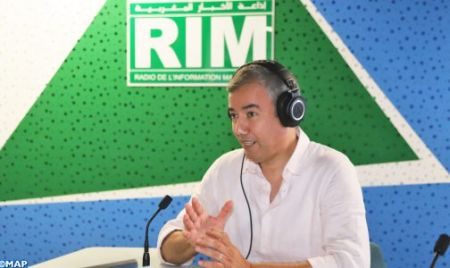 The speech of HM King Mohammed VI, on the occasion of the 22nd anniversary of the Throne day, renewed the invitation extended to Algeria for the opening of the borders, affirmed, Tuesday, the political scientist and researcher in Saharan affairs, Ahmed Noureddine. Noureddine who was the guest of the morning show of the Moroccan Radio channel “RIM RADIO”, recalled that the Sovereign affirmed that between two neighboring countries and two brotherly peoples, the normal state of things is that borders are and remain open. In this regard, the expert added that the Marrakesh Treaty, founding text of the Arab Maghreb Union, stipulates the free movement of people, services, goods and capital between its countries, noting that the royal speech has stressed the need to respect international commitments. HM the King, he went on, has always worked in favor of cooperation and overcoming past crises given that Morocco is banking on and building a shared future, noting that the Kingdom has always been a source of benevolence for Algeria since colonial times and that it has never harmed this brother Maghreb country. The Throne Speech confirmed that no one was behind this closure and reminded Algeria of the need to show responsibility and understand the tragedy experienced by some families who have loved ones in the two countries but cannot meet because of this decision.