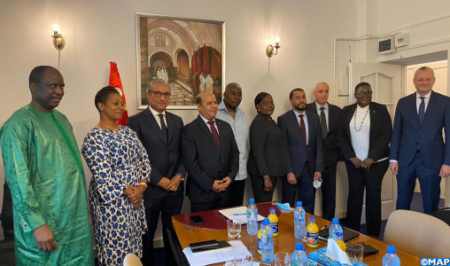 The Moroccan ambassador to Poland, Abderrahim Atmoun, underlined, Friday in Warsaw, the Kingdom’s strong African commitment, under the enlightened leadership of HM King Mohammed VI, for the development and the emergence of a strong, united and confident Africa. During a meeting held at the Tunisian embassy in Poland, during which Mr. Atmoun was unanimously appointed dean of the African diplomatic corps in Warsaw, in the presence of all the ambassadors of the continent accredited in the Polish capital, the Moroccan diplomat noted that the Kingdom, through its African anchoring, continues to work under the leadership of the Sovereign to strengthen South-South cooperation so as to achieve further development and prosperity for the African peoples, says a press release issued by the Moroccan embassy in Warsaw. The ambassador seized this opportunity to thank his counterparts for the confidence placed in Morocco and praised the work accomplished by his predecessor Fatnassi Sghaier, ambassador of the Republic of Tunisia. Atmoun also assured his counterparts of his full availability and determination to strengthen coordination between African diplomats accredited in Poland.