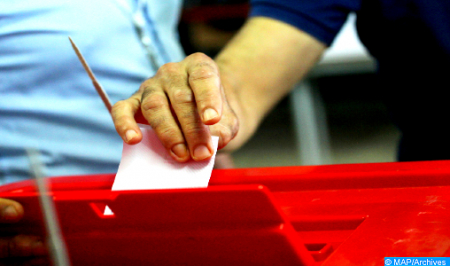 The election of the members of the chambers of agriculture, commerce, industry and services (CCIS), crafts and fisheries began on Friday morning in all the regions of the Kingdom. The professional electorate goes to the polls to elect 2,230 candidates among the 12,383 contending for seats at the various professional chambers of the Kingdom. Regarding the distribution of candidates to fill the seats in these chambers, 2,461 candidates were presented in the chambers of agriculture, i.e. a ratio of 4 candidates per seat, 5,377 in the CCIS (more than 6 candidates per seat), 4,243 in the craft chambers (8 candidates per seat) and 302 for the fisheries chambers (3 candidates for each seat). A total of 2,940 applications were submitted by women, including 148 for the chambers of agriculture, 1,513 for the CCIS, 1,231 for the craft chambers and 48 for the fisheries chambers. Candidates belonging to political parties monopolize 78.89 pc of the candidatures with 9,769 against 2,614 candidates for those without political affiliation, i.e. a rate of 21.11 pc. These elections are expected to establish a new vision to turn these bodies into a real lever for investment and a partner in the service of the general interest in terms of economic development, through their status as direct interlocutor of public authorities and administrative services and local authorities in the trade, industry and services sectors.