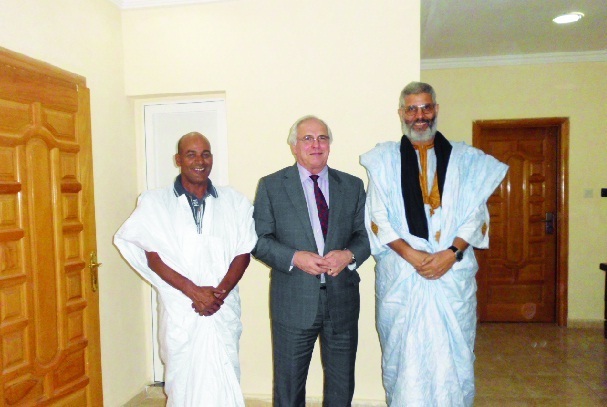 The Polisario leaders and their Algerian mentors tried to discourage the UN envoy, Christopher Ross, from meeting Sahrawi dissidents during his visit to the Tindouf camps, but the UN envoy eventually responded to the dissidents’ requests.
Moreover, the rebellious singer, Najem Allal, who has been abducted by unknown persons, was released on November 3rd by the Polisario security, just on the eve of Ross’s arrival in Tindouf.
Thus, the personal envoy of the UN Secretary General held a meeting that lasted for more than two hours with protester Mahjoub Salek, general coordinator of the Khat Achahid Movement (the Martyr’s Voice Movement), which is opposed to the Polisario separatist ideology.
Salek seized this unexpected opportunity to open up and tell Christopher Ross the truth about what is really going on in the refugee camps of Tindouf.

Ross, who used to listen only to the official version of the henchmen of Mohamed Abdelaziz, the immovable leader of the Polisario, said he was very taken aback by the testimony of Salek and other opponents. These opponents have unveiled the serious human rights violations committed by the Polisario jailers in the secret prisons where all those who dare to express opposition to Mohamed Abdelaziz or his cronies are detained.
Mahjoub Salek told Ross that the Polisario leadership represents only itself, as long as it is not chosen in free and fair elections. He also told the UN envoy that Khat Achahid boycotted the latest Polisario Congress deeming it was a mere masquerade.
Mahjoub Salek called for a more active role of the UN for a better, more democratic and legitimate representation of the Sahrawi populations in Tindouf. He also asked the UN envoy to speed up the settlement of the Western Sahara issue so that the Sahrawis can freely decide their fate. He argued that any delay in the settlement process constitutes a crime against humanity.
Representatives of the Saharawi Revolutionary Youth Movement, expelled journalists, the singer Najem Allal and other opponents to the Polisario leadership have also requested to meet Christopher Ross. But no source could confirm if such meetings took place or not.