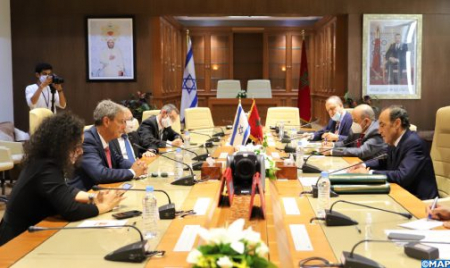 Speaker of the House of Representatives, Habib El Malki, held talks on Wednesday in Rabat with Chairman of the Foreign Affairs and Defense Committee in the Israeli Knesset, Ram Ben Barak, who is visiting Morocco as part of a delegation led by Israeli Foreign Minister, Yair Lapid. The current situation in the Middle East region, the many challenges associated with it and the means of achieving security and peace in the various parts of the world were at the center of these talks, in addition to many topical issues of common interest. The discussions also focused on the prospects for cooperation between the two legislative institutions through the use of the various mechanisms of parliamentary diplomacy, as well as the potential of the two countries in various fields. In this context, El Malki underlined the foundations of Moroccan diplomacy “which aims to establish peace and stability as a condition for the progress of peoples and which constantly tends to bring points of view closer and to weave links between peoples rather than create conflicts”. He also called for a long-term dialogue to defuse tensions and end conflicts as well as new forms of cold war. In addition, the speaker of the House of Representatives highlighted the important role that the Israeli community of Moroccan origin “which has preserved its identity, its traditions and its link with Morocco” can play in the development of cooperation between the two countries, noting in this regard that the human dimension “plays a fundamental role and is one of the conditions necessary for its continuity”. Malki also noted that the Kingdom’s 2011 Constitution stipulates that the Hebrew component is a tributary of the national identity, adding that this “common link” must become an important lever in building the future. Regarding the prospects of cooperation between the two institutions, he said that parliamentary diplomacy offers wide opportunities for the benefit of this cooperation, indicating that Morocco has embarked on a futuristic project based on South-South cooperation, considering that its strengthening and upgrading are among the main missions of parliamentary diplomacy. For his part, Ben Barak noted that dialogue remains the best option for settling disputes, especially in the Middle East. Concerning bilateral relations, the Chairman of the Knesset Foreign Affairs and Defense Committee stressed that there are many areas of cooperation between the two countries, calling for the creation of a parliamentary friendship group and the exchange of visits that can contribute to the establishment of peace and stability. Ben Barak stressed the important role that the Israeli community of Moroccan origin can play in the consolidation of bilateral relations, expressing great pride in the upholding by the Moroccan constitution of the Hebrew component as a tributary of the Moroccan identity. In this regard, he recalled the solicitude of the Kings of Morocco for Moroccan Jews, particularly in key historical stages such as during the Second World War, which makes of the Kingdom, according to Ben Barak, a “distinguished model”.