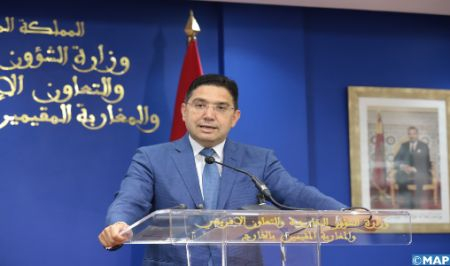 The visit of Israeli Foreign Minister Yair Lapid to Morocco reflects “the common commitment to move forward to give tangible meaning to bilateral relations based on flexible and effective cooperation mechanisms,” said Wednesday in Rabat, Minister of Foreign Affairs, African Cooperation and Moroccans Abroad, Nasser Bourita. During a press briefing at the end of his talks with his Israeli counterpart, Bourita stressed that “our relationship, as stated by HM the King, draws its strength from the solid attachment of the Jewish community of Moroccan origin to the Kingdom and the unfailing links between this community, including the one present in Israel, and the person of His Majesty the King,” noting that, on this basis, the talks were in-depth and exhaustive on bilateral and regional issues. The resumption of relations with Israel “reflects the will of HM King Mohammed VI to reactivate the mechanisms of cooperation between the two countries and to relaunch regular contacts, within the framework of healthy and friendly diplomatic ties,” he noted. The resumption of relations with Israel expresses a will and a conviction, expressed by the Sovereign, who personally chaired last December the signing of the tripartite agreement (Morocco-Israel-USA), which laid the foundations of this bilateral relationship that we are building, he said. The Kingdom’s relationship with Israel is characterized by a particular context relating to the upholding by the Moroccan Constitution of the Hebrew component as one of the tributaries enriching the plural Moroccan identity, Bourita said. In this regard, the minister recalled that Moroccan Jews have lived and continue to live in Morocco with their Muslim brothers, within the framework of the concern of His Majesty the King for Moroccan citizens regardless of their religion. Therefore, this bilateral relationship has experienced a virtuous dynamic, with the creation of five working groups covering promising sectors, such as research and innovation, tourism, aviation, agriculture, energy, the environment, trade and investment, Bourita said, noting that these multi-sectoral groups have held meetings, in addition to ongoing contacts between the government departments concerned. In addition, the Minister mentioned promising prospects for cooperation between the two countries, stressing that the talks with his Israeli counterpart focused on ways to develop these prospects and strengthen them at the institutional and private sector levels. “We aspire to enrich our relations with a human dimension, one of the manifestations of which was the recent inauguration of direct flights between the two countries and the enthusiasm this has aroused among Israelis of Moroccan origin and the pride of their attachment to the person of His Majesty the King,” he noted. The minister also mentioned the signing of three new cooperation agreements that consolidate the legal framework governing bilateral relations in the sectors of aviation, youth and sports, and political consultations, adding that the two parties have agreed to move forward in the development of new agreements to facilitate investment, trade and scientific research. On the situation in the Middle East, Bourita stressed the importance of maintaining the truce after the incidents of last May, noting that tensions are only beneficial to extremists who are more inclined to spread hate. The meeting was also an opportunity to discuss the prospects for peace, he said, adding that His Majesty the King “has repeatedly stressed the need to break with the status quo and the stalemate in order to resume negotiations, which are the only way to achieve a final, lasting and comprehensive solution based on a two-state solution of two peoples living side by side in peace and security. He also stressed the urgent need to rebuild trust between the Israeli and Palestinian sides for the sake of peace, stability, progress and prosperity in the region. Bourita said that HM the King, Chairman of the Al Quds Committee, “has constantly stressed the imperative of preserving the unique character of the Holy City as a universal heritage of mankind, endowed with a deep symbolism and a spiritual charge for the followers of the three monotheistic religions”. He also stressed the importance of restoring trust, maintaining calm and avoiding anything that might inflame tensions, “fundamental prerequisites for opening a political horizon to the Israeli-Palestinian conflict and maintaining the two-state solution as the only way to ensure peace and stability for all”. Bourita stressed the importance of a rapid return to the table of direct and useful negotiations that should ultimately lead to the establishment of a Palestinian State, the establishment of a comprehensive peace and the creation of conditions for progress and prosperity in the region.