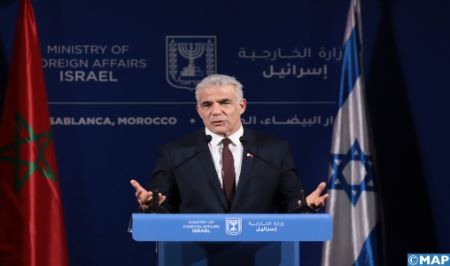 Morocco is a “courageous” leader in Africa, North Africa and the Arab world, thanks to its tradition of tolerance, its political stability and its ability to get along with all countries in the region, Israeli Foreign Minister Yair Lapid said Thursday in Casablanca. “This is something extremely important for us, because Morocco has a tradition of tolerance, political stability and an ability to get along with all the countries in the region,” Lapid said at a press briefing on the second and final day of his visit to the Kingdom. “The Kingdom is a key player in terms of rapprochement. Everyone is watching what Morocco is doing and other countries will follow the leadership of His Majesty the King,” he said. Lapid, who thanked His Majesty King Mohammed VI for the hospitality, goodwill and quality of the welcome, which was marked by warmth, joy and friendship, recalled that the signing of new agreements between Morocco and Israel lays the foundations for a “partnership that will make our two nations and our two peoples stronger”. According to him, this partnership should be seen strategically as an aspect of tolerance and moderation alongside countries that promote “economy and peace for their people, instead of war, death and destruction”. In addition, the Israeli FM noted that the process born of the Tripartite Agreement (Morocco-US-Israel) and boosted by the change of governments in the United States and Israel “has just reached a historic peak” with the opening of an Israeli embassy in the United Arab Emirates, a few months ago, the opening of an Israeli liaison office this Thursday in Rabat, and a similar office soon in other Arab countries. Asked about the role that Morocco can play in mediating between Palestinians and Israelis, the Israeli official said that the Kingdom “has diplomatic capabilities, connections and relations, in addition to the moral authority of His Majesty King Mohammed VI, which make it a country like no other in the region”.