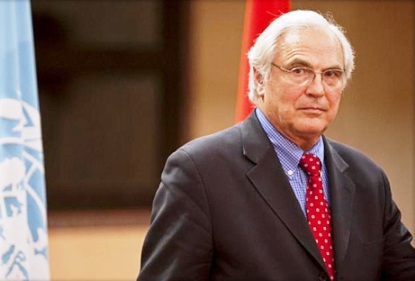 The latest report of the UN mediator for the Western Sahara issue, Christopher Ross, has brought more than one surprise, lifting the veil on an aborted conflict, which is kindled artificially, in a region highly threatened by destabilization.
Christopher Ross has not only confirmed that the issue of human rights does not fall within the scope of his prerogatives, but also he made it clear that it was critically important to bring closer the standpoints of Morocco and Algeria to reach a lasting settlement to this regional conflict.
This means that the UN Secretary General’s Special Envoy is well aware that Algeria is a party to the conflict, despite Algerian leaders’ repeated denials.
It is in this context that one must understand Ross’s statements affirming that in the coming phase of his mission he would push towards the improvement of relations between Algeria and Morocco.
It is becoming increasingly clear to the UN envoy as well as to the international community that the key to the Western Sahara conflict should be sought on the side of Morocco and Algeria.

As for the Algeria-based Polisario, which is struggling for the independence of Western Sahara, it only serves as a cover to the involvement of Algeria in this conflict, which is actually handled by Algerian leaders and not by the Polisario. And this is evidenced by the military, financial, political and even diplomatic support extended by Algiers to the Polisario, whose leaders travel abroad with Algerian passports.
On the other hand, Christopher Ross’s report did not overlook the human rights issue but posed it in a different way. Respect for human rights is an issue that must be addressed as a whole, i.e. in the Western Sahara as well as in Tindouf, the Polisario stronghold on Algerian territory.
But this perspective is a source of great embarrassment not only for the Polisario Front, but also for Algeria, which has so far stubbornly refused to allow the UNHCR to conduct a census of the Sahrawi people living in Tindouf under the control of the Polisario.