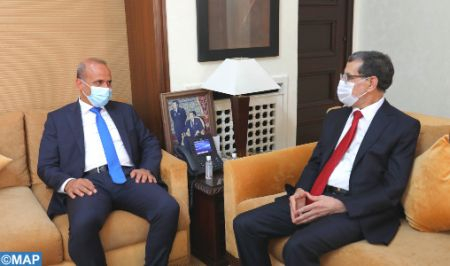 The solidity of friendly relations between Morocco and Libya was highlighted, on Wednesday in Rabat, during a meeting between the Head of Government Saâd Dine El Otmani and the vice-president of the Libyan Presidential Council, Abdallah Hussein Al-Lafi. During this meeting, the two officials reaffirmed the common will to strengthen bilateral cooperation and broaden its horizons, while creating conditions conducive to the sharing of experiences and expertise in various fields. In this context, El Otmani reiterated the Kingdom of Morocco’s continued commitment to positively support efforts aimed at strengthening the stability of the Libyan State and preserving its unity and the cohesion of its institutions, within the framework of the sovereignty of the Libyan decision, in accordance with the principles and values ​​of Morocco’s foreign policy under the wise leadership of HM King Mohammed VI, said a statement from the Department of the Head of Government. For his part, Al-Lafi expressed the gratitude of his country and of the Libyan people to HM the King for the ongoing efforts that Morocco continues to make in favor of Libyan reconciliation and the culmination of the political process in the country. In this context, he highlighted the sincere and neutral positions of the Kingdom, which contributed significantly to bringing together the views of the various Libyan players and to preparing a “ground” that is favorable to Libyan reconciliation, the statement noted. This meeting took place in the presence of members of the delegation accompanying the vice-president of the Libyan Presidential Council, as well as the charge d’affaires of the Libyan embassy in Rabat.