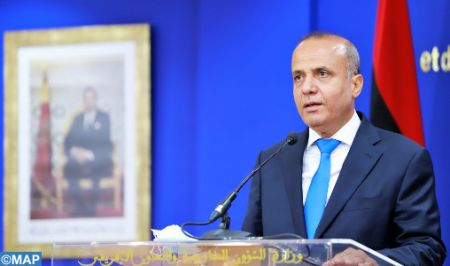 Morocco has always worked for a consensus between the Libyans, whether through the Skhirat agreement, the holding of the Bouznika meetings, or the hosting of the dialogue between the president of the Libyan High Council of State and that of the Libyan House of Representatives, said on Wednesday in Rabat, the vice-president of the Libyan Presidential Council, Abdallah Hussein Al-Lafi. During a joint press briefing with the Minister of Foreign Affairs, African Cooperation and Moroccans Abroad Nasser Bourita, after their talks, Al-Lafi expressed the wish of his country to benefit from the Moroccan experience in matters of national reconciliation, welcoming the great role played by Morocco, thanks to HM King Mohammed VI, in favor of political reconciliation in Libya and to make contacts between the Libyan parties. He also expressed his gratitude to the Kingdom of Morocco, King, government and people, for the support given to the dialogue between the various Libyan political players. In addition, the vice-president of the Libyan Presidential Council described as “excellent” his meeting with Bourita, noting that several issues were discussed on this occasion, including the holding, next week, of the joint consular commission to overcome obstacles and difficulties in granting visas and to monitor the air transport issue. The meeting also focused on the holding, in the coming days, of a Moroccan-Libyan business forum, which will contribute to the consolidation of bilateral relations, he said. The Libyan official also noted that young Moroccans detained in Libya will be repatriated to Morocco soon, adding that the Libyan Interior Ministry has assured that they are in a good state of health. “We assure the families that these young people are well treated,” said Al-Lafi, affirming that there will be contacts between the Moroccan side and the Libyan Interior Ministry in order to prepare their return to the Kingdom.