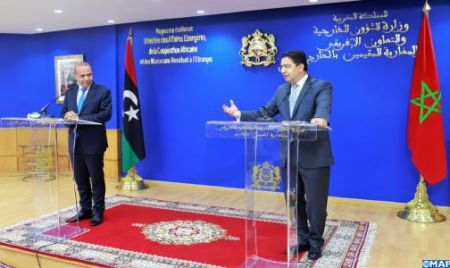 Morocco will always be by the side of Libya without any agenda except that of the security and stability of this country, said, on Wednesday in Rabat, Minister of Foreign Affairs, African Cooperation and Moroccans Abroad Nasser Bourita. The Kingdom will always be by the side of Libya, by supporting its efforts and those of the international community, without any interference or agenda except that of the security and stability of this country, since this issue is crucial for the Maghreb region which faces several challenges, underlined Bourita during a joint press briefing with the vice-president of the Libyan presidential council, Abdallah Al-Lafi, following their talks. The minister also said he told the Libyan official of HM King Mohammed VI’s support for the political process in Libya, the achievements of the presidential council and the provisional executive powers, as well as all Libyan efforts to overcome the difficulties and meet the aspirations of the Libyans. Bourita also considered that the current situation in Libya is marked by difficulties at the level of the political process, mainly concerning the preparation of the elections and the respect of the commitments relating to the security and military aspects, adding that Morocco, aware of these constraints, remains convinced that Libya and the Libyans are capable of transcending them. The Libyan elections are an important event for establishing legitimacy in Libya, he said, recalling the Libyan and international consensus about this legitimacy which must be decided by the Libyan people, through a healthy and transparent election. Morocco considers that the obstacles hampering the process of preparing for these elections can be overcome through will and calm dialogue, while prioritizing the interests of Libya, noted Bourita, adding that the Kingdom does not have a magic wand but he has the sincere will, in accordance with the High Instructions of HM the King, to encourage dialogue and negotiation between Libyans to reach consensus in order to overcome these obstacles. The minister also indicated that he discussed with the Libyan official the issue of national reconciliation which remains an essential factor to turn the page of the past and promote cohesion between all components of the Libyan people, stressing that Morocco, which has led an exemplary process in this area through the Equity and Reconciliation Commission, is ready to share its experience and support Libya. Referring to bilateral relations, Bourita highlighted the constant concern of HM the King to preserve the solid ties between the two brotherly peoples and the permanent contact with the Libyan institutions, thanks to the shared history and the unity of destiny. He also said that he discussed with Al-Lafi the holding, in the coming weeks, of a Moroccan-Libyan business forum, as well as of the joint consular commission in the coming days in order to deal with issues of interest to the Libyan communities in Morocco and the Moroccan communities in Libya. The talks also focused on strengthening bilateral cooperation in several important sectors, including agriculture, he concluded.