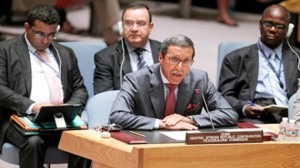 In his speech before the C24, organized by the United Nations in Dominica (August 25 to 27), Permanent Representative of Morocco to the UN, ambassador Omar Hilale exposed human rights violations perpetrated by Algeria and the “polisario”, against the populations held captive in the camps of Tindouf, mainly the military recruitment of children.

“There is an issue that deeply concerns Morocco, in particular, and the international community in general, and it is the military recruitment of children in the camps of Tindouf. Algeria, which proclaims itself to be just an observer of the Moroccan Sahara question, is hosting training camps and forced recruitment of children as young as 10 years,” said Hilale, while showing several photos of young children, carrying weapons in military parades and training in the Tindouf camps.

“The Algerian representative claims that there is no evidence. Here are the photos and even videos from the alleged polisario’s own websites, showing several children in military uniforms, even bare-chested, undergoing training. These photos are a terrible indictment of his country,” stressed the Moroccan ambassador.

“Algeria and the +polisario+ train these children to kill. They are preparing them to become terrorists, similar to those of Daesh Khorassan, shown today on CNN, BBC or France 24, before and after the terrorist attack committed at the Kabul airport. From the footage, they are subjecting these children to the same intensive training and fanatical indoctrination. Unfortunately, this is the true heinous face of the “polisario”, whose connivance with terrorist groups in the Sahel-Saharan region is well known. This highlights the direct international responsibility of Algeria because this forced military recruitment of children takes place on its territory,” Hilale pointed out.

“It is extremely serious that Algeria, which is a party to all the international conventions, agreements and declarations on child’s rights, allows an armed group to indoctrinate children to engage in war, to carry out military operations, to become commandos, killers. Instead of offering them school and education, as those in the Moroccan Sahara, Algeria and the “Polisario” separate them from their families, deprive them from childhood and offer them no other alternative than war and armed violence,” Ambassador Hilale highlighted.

Commenting on the denial of the Algerian ambassador to the UN, Soufiane Mimouni, who tried to clear his country of these serious and mass violations of children’s rights, Hilale asked him “so where are the training camps for child soldiers? They is in the desert of Tindouf in Algerian territory. Those who train them are armed members of the polisario and those who supervise them are Algerian instructors.”

Hilale, then, concluded by saying that “the empty denial of the Algerian colleague will not be able to clear Algeria of its international responsibility towards these innocent children, who would have liked to learn and use pens instead of Kalashnikov”.

This heated exchange between the Moroccan and Algerian ambassadors took place under the guilty silence of the “polisario” separatists’ representative.