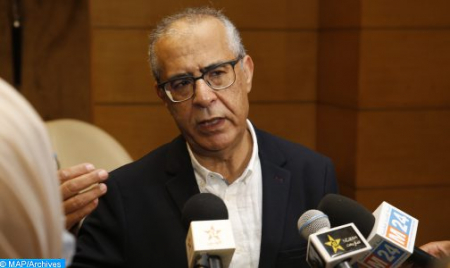 The Secretary General of the Ittihadi National Congress, Abdeslam Laaziz, has said that this party seeks, through its participation in the elections of September 8, to strengthen its presence within legislative, municipal and regional institutions. In an interview with MAP and its M24 news channel, Laaziz stressed that the party has a good chance of achieving important results in these elections, considering however that this progress hinges on the general conditions related to the conduct of these elections. In this regard, he expressed the wish that “everyone should be aware that Morocco needs truly transparent elections which reflect the will of the citizens, in order to give hope to Moroccans, even if participation is not very strong this time, it will be stronger soon”. The leader of the Ittihadi National Congress, who said that “the way in which the elections are conducted pushes the citizen to boycott elections”, called on all eligible Moroccans to vote massively, given that “change cannot take place in the absence of democratic forces and forces seeking to initiate changes within institutions”. He also expressed the hope that “the state can fully play its role and avoid the negative neutrality observed in previous elections”, adding that this implies “hitting hard against those who undermine the electoral operation”. Regarding the possibility that these elections may open the prospect of a new political alternation, Laaziz noted that the conditions for the conduct of these elections, and in the light of certain indicators relating to the period prior to the submission of candidatures, and even after, “show the absence of clues as to a possible new political alternation”, adding that the dominant factor is “continuity”, since the parties which try to position themselves as an alternative are those which were part of previous governments, including the current one, and have very important ministerial posts”. Commenting the issue of political alliances, he underlined that the voting method adopted and the conduct of the elections “do not encourage real political alliances (…) but only temporary rapprochements of interest”, adding that the overwhelming majority of parties seek to be represented in government, regardless of which party is in government or who leads it. He added that his political party is trying to work with members of the Socialist Democratic Vanguard Party and the Unified Socialist Left to participate in the elections under the leadership of the Federation of the Democratic Left. Referring to the vision of the Ittihadi National Congress on the implementation of the development model following the elections of September 8, Laaziz stressed that his party has consulted and analyzed this model and considers that it has positive elements, especially its social objectives. However, he considered that this model “does not break with the liberal policies adopted in Morocco since the 1980s”.