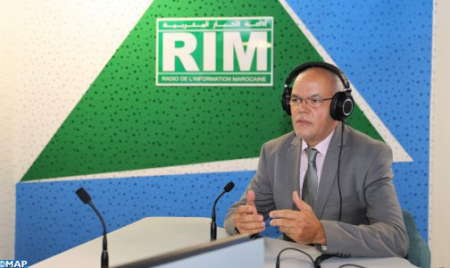 The Director of Cooperation and Promotion of Private School Education in charge of student life, Aziz Nahya, has affirmed that all preparations for the vaccination campaign for 12 at 17 age group are complete and that the centers concerned with this operation are ready to receive the beneficiaries. Nahya, who was the guest of the Moroccan radio channel “RIM RADIO”, said that 420 centers have been set up for this purpose, as part of a coordination at the level of each region between the public authorities, the Ministry of Health and the Ministry of National Education. He said that the Department of National Education will take care of the preparation of reception areas and the mobilization of educational teams for data collection and guidance of citizens, while specialized medical teams will take care of the vaccination operation. He explained that they include in particular high schools that would receive students who will register from August 31 to benefit from the vaccine, stressing that the vaccination campaign will benefit students aged 12-17 in public and private schools, as well as to students of foreign missions. He specified that establishments have been chosen to cover the whole of the national territory, while there are ideas about the establishment of mobile units in charge of sending vaccines to children who are unable to go to the vaccination centers. He assured that making an appointment is not necessary to benefit from the vaccination and students can be vaccinated wherever they are now, “during the remaining of the holidays”. Nahya further explained that the list of these centers, their addresses and the type of vaccine that will be administered there will be published on social networks and official websites of the Ministry of National Education and of academies, noting that the vaccination operation will take place during specific times until 6 p.m. and probably 7 days a week. He noted that an authorization according to each age group will be available at the vaccination centers. When the tutor will present himself, accompanied by the student, he will give his consent to the vaccination operation, and will choose also the type of vaccine (Pfizer or Sinopharm), he said, specifying that the operation is voluntary and that “it is not probable that the presentation of the vaccination pass becomes compulsory for the pupils in order to benefit from in-person education”. He also stressed that families are an essential partner in this operation and that there was direct contact with them in order to make them aware of its importance before the launch of this campaign, welcoming the strong responsiveness of parents of students who are called upon to support this operation. Morocco recorded 8 deaths among children and 117 critical cases that required transfer to intensive care units due to Covid-19 during the month of August, Nahya recalled, noting that these data prompted the government to extend vaccination to children. This decision was taken on the basis of the recommendations of the scientific committee which considered that this process is essential to achieve collective immunity at the national level, like the decisions taken in many countries concerning this age group, he noted.