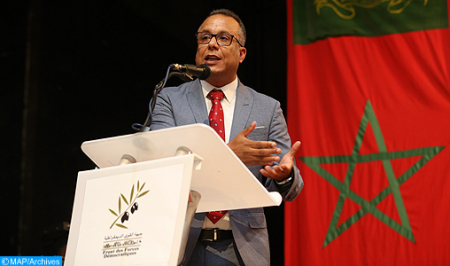 The Front of Democratic Forces (FFD) participates in the 2021 elections with the ambition of having two parliamentary groups in both parliament houses, the mayor’s office of a major city and the presidency of some local authorities throughout the Kingdom, said, on Friday, the party’s Secretary General, Mustapha Benali. To achieve this, Mr. Benali stressed, in an interview with MAP, that the FFD designed an achievable election platform that matches its ambitions. Among the party’s key proposals, Mr. Benali cites the gradual establishment of a fixed income for everyone, with no conditions, bearing the name “Income of Dignity”. This proposal, which dates back to 2016, “aims to tackle the issue of poverty, to reduce social disparities and to support people’s purchasing power,” he explained, stressing its role in “rebuilding a social contract based on the sense of belonging and civic-mindedness.” “Of course, the only obstacle to achieve this proposal is the sustainability on the budgetary level,” M. Benali admitted, adding nevertheless that it is possible to establish an appropriate financing plan, “especially in view of the experience accumulated in the context of the COVID-19 pandemic after a special fund was established.” Regarding the role of youth in the party’s platform, the FFD Secretary General stressed that they occupy important positions in all of the party’s structures. “It is a bet for the future,” he said. “Many of our party’s electoral lists are led by young people, including renowned artists and athletes,” he added. “I even dare to say, without any pretension, that the FFD is Morocco’s first youth party,” he affirmed, explaining that this is “not only because I myself am a pure product of the Democratic Youth, but especially because of the considerable number of youth organizations affiliated to that party.” Concerning the issue of political nomadism, Mr. Benali asserted that his party “has been campaigning for years for the prohibition of political nomadism,” adding that “we are firmly committed to the moralization of political life.” In this regard, he lamented how this phenomenon is growing, “simply because certain political actors seek to have a place among the majority and in the government by all means.”