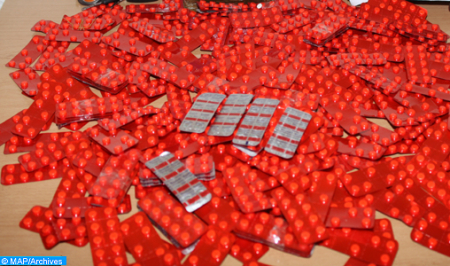 Policemen in Kenitra on Friday arrested, on the basis of precise information provided by the services of the General Directorate of Territorial Surveillance (DGST), a man in possession of 16,080 psychotropic tablets. The 32-year-old man was busted at El Mnassra motorway toll station, near Kenitra, National Police (DGSN) said in a statement, specifying that the suspect refused to comply with arrest procedures. He was subsequently arrested after fierce resistance during which two police officers were injured, the statement added. Search operations led to the seizure of 16,080 psychotropic tablets and three phones in the suspect’s car, the source pointed out. The defendant was placed on custody, while investigations are underway under the supervision of the competent public prosecutor’s office.