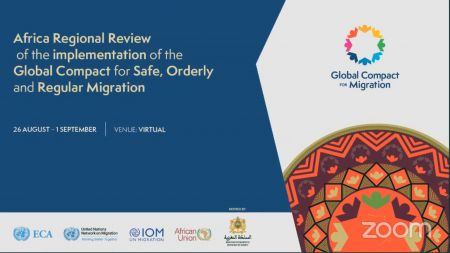 African countries are called upon to act together for the protection, rehabilitation and integration of migrants, especially those in irregular situation, said Tuesday the participants in a virtual conference initiated by international institutions. During this event jointly organized from August 31 to September 1, 2021 in Morocco by the United Nations Network on Migration, the Economic Commission for Africa (ECA) and the International Organization for Migration (IOM), in partnership with the African Commission, representatives of African states called for the establishment of a framework of bilateral cooperation as well as targeted public policies to support the integration of migrants and their contribution to development. This meeting is part of the first intergovernmental conference for the African Regional Review on the implementation of the Global Compact for Safe, Orderly and Regular Migration. Particular emphasis was placed on the problems faced by migrants and their families in terms of mobility via transit to destination countries, especially at a time marked by the spread of Covid-19. Access to vaccination for migrants, to basic services (health, education…), issuance of supporting documents (residence cards and other identity documents), as well as the exploitation of migrants in domestic work are issues that affect an entire segment of migrants at present, stressed panelists. Addressing the Moroccan experience in this regard, the Director of Consular and Social Affairs at the Ministry of Foreign Affairs, African Cooperation and Moroccans Abroad, Mohamed Basri, said that Morocco, long considered “a crossroads of migratory flows”, has regularized, between 2014 and 2017, the situation of more than 50,000 illegal migrants. In this regard, he referred to the measures taken by Morocco to dismantle the criminal networks operating in this field, citing the law 27-14 on the fight against trafficking in human beings. The head of the delegation of the International Committee of the Red Cross to the African Union, Bruce Mokaya Orina, emphasized the issue of the disappearance of migrants during their displacement especially in the Sahel region. “It is necessary to establish collaborative mechanisms for the control and security of migration flows,” he underlined. Mamadour Goita, of the Pan-African Network for the Defense of Migrants’ Rights, pointed to the shortcomings and deficit in bilateral cooperation between African countries for the integration of migrants, highlighting the contribution of the African diaspora to the development of the continent.