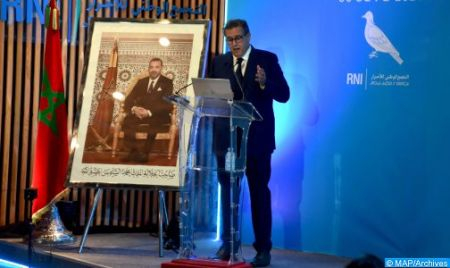 The National Rally of Independents (RNI) has presented an electoral program that includes five commitments and as many measures, defined by a series of feasible objectives that are applicable on the ground, said Saturday in Tetouan, the president of this party, Aziz Akhannouch. Speaking at an election rally, organized on the sidelines of partisan activities held in Tetouan and Ouezzane, Akhannouch said that the electoral program of his party is applicable and feasible, especially since the party has highly skilled professionals, which was reflected in the distinguished performance of ministers who represent the party in government, especially during the last decade. He stressed that this good performance achieved by the ministers of the RNI in the management of public affairs will constitute a fertile ground to continue to implement the program of the party in the future, if the party is trusted to manage the government, saying he was confident in the intelligence of Moroccans, who will have their say in the vote on September 8. In this context, Akhannouch said that the tours of party officials in several cities of the Kingdom have shown that citizens have been responsive to the speech and the electoral program of the party, and aspire to change.