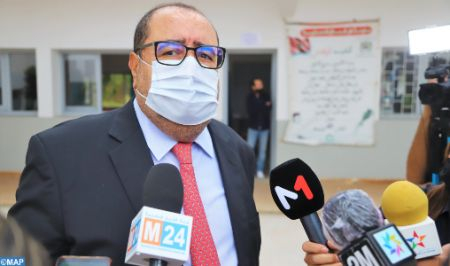 The first secretary of the Socialist Union of Popular Forces (USFP), Driss Lachgar said on Wednesday in Rabat that the legislative, communal and regional elections are of crucial importance in a context of health crisis. After performing his national duty, Lachgar told the press that the exceptional situation related to the spread of the Covid-19 pandemic further highlights the crucial role of elections in providing answers to present and future challenges. The Covid-19 crisis has highlighted several national challenges, including public health, employability, the economy and finance, he said, adding that the next elected institutions should be able to address them. In this regard, he called on citizens to show responsibility and vote massively to elect officials capable of consolidating the position of elected institutions. According to the data on the candidacies filed for the election of members of the House of Representatives, the USFP presented 91 lists, with some 303 candidates in local constituencies and 12 lists with a total of 90 candidates at regional level. Regarding the elections of regional councils, the party presented 668 candidacies or 6.75% of all candidacies at the national level, while in the elections of communal and district councils, the USFP presented 12,945 candidacies, or 8.22%. Polling stations opened Wednesday at 8:00 a.m. throughout the Kingdom, to elect members of the House of Representatives, communal and district councils and members of regional councils. Voting will continue throughout the country until 7 p.m.