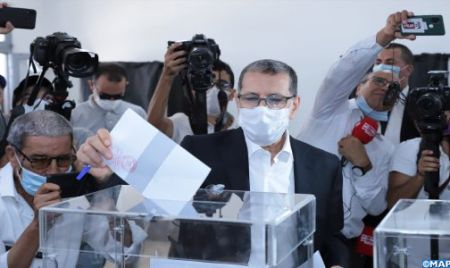 The general elections of September 8 are likely to see a large turnout, particularly since first indicators “suggest a significant turnout,” said Wednesday in Salé, the Secretary-General of the Party of Justice and Development (PJD) Saad Eddine El Otmani. After completing his civic act, El Otmani highlighted in a statement to the press the strong symbolism of these legislative, communal and regional elections, a process that will lead to a change at all levels. These elections take place in the context of the spread of the Covid-19 pandemic both nationally and internationally, said El Otmani, adding that the Kingdom, similar to several developed countries, was able to overcome the challenge of holding elections in this current context. Polling stations opened Wednesday at 8 a.m. throughout the Kingdom to elect members of the House of Representatives, communal and district councils, and members of regional councils said the Ministry of the Interior. The voting operation will continue across the country until 7 p.m.