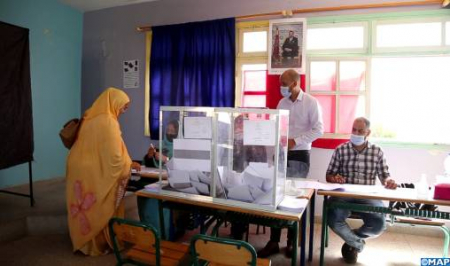 The inhabitants of the three regions of the Moroccan Sahara have already proven in the past that they are authentic Moroccan citizens and they have just confirmed this during the municipal, regional and legislative elections held on Wednesday. With a voter turnout of 66.94% in Laayoune-Sakia El Hamra, 63.76% in Guelmim-Oued Noun and 58.30% in Dakhla-Oued Eddahab, these three regions of the southern provinces of the Kingdom surpassed the national turnout of 50.18% recorded during these elections, according to figures issued Wednesday evening by the Ministry of the Interior. This strong participation is a strong signal of the unwavering attachment of the inhabitants of the Sahara to their country and their effective involvement in the building of its institutions, within the framework of an advanced regionalization which paves the way to achieving further progress and prosperity. It is also a message sent to those who still cherish their dreams of a so-called “independence” of the Sahara that the populations of this territory conceive their future and that of their children only within Morocco and its democratic institutions and not in the hellish desert of the Lahmada camps, in southern Algeria, and by plotting with a foreign country. The separatists and their rare supporters in the southern provinces have not skimped on the means lately to try to sow doubt in the minds of Moroccans of Sahrawi origin and encourage them to “boycott” these elections, but all their efforts were in vain as they did not take into consideration the determination and the patriotism of these populations that took part in a strong manner in these elections to fulfill their patriotic duty and at the same time express their categorical rejection of these deceptive propaganda campaigns. This will to contribute to the democratic process, by participating in the choice of the representatives of these citizens in the elected councils and within the legislative institution, has finally triumphed over all the maneuvers and all the malicious attempts of the enemies of the country’s territorial integrity.  The three elections held on Wednesday confirmed the choice of the continuity of an irreversible historical process where one cannot conceive Morocco without its Saharan provinces and where one cannot imagine these provinces building their future outside Moroccan sovereignty. Even before the day of the vote, the conduct of the electoral campaign in a climate of serenity and exemplary civility showed the admirable spirit of citizenship among the inhabitants of the Saharan provinces. And it cannot be otherwise, since these populations live in peace and quiet and the southern provinces are experiencing an unprecedented development dynamic, with a growth rate well above the national average and good social indicators. The new development model of the southern provinces, which is mobilizing investments of 80 billion DH, has radically changed the face of these regions by providing them with modern infrastructure in the areas of roads, airports, health, education, water and electricity. But beyond these elections, the very high voter turnout in these elections takes on the appearance of a referendum through which these populations loudly proclaimed their massive support for autonomy as a unique and realistic solution to the regional conflict which has lasted for more than 40 years in this southern part of the Kingdom. It is also about the democratic management of their local affairs, within the framework of the sovereignty of Morocco. Indeed, and for several years now, the elected councils (municipalities, provincial and prefectural councils and regional councils) in the three southern provinces have been managed exclusively by the inhabitants of the Sahara, following democratic elections that were unanimously welcomed by the international community.