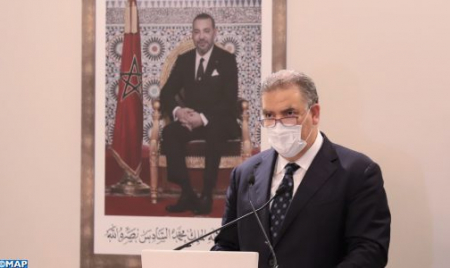 The presence of domestic and foreign observers who monitored the general elections of September 8 “has enhanced the transparency of the electoral process in the Kingdom,” said Thursday Interior minister Abdelouafi Laftit. Speaking at a press briefing, Laftit said that the number of observers who monitored the electoral operation reached 5020, of which 4,323 are civil society associations, 568 of the National Human Rights Council (CNDH) and 129 foreign observers. Laftit lauded the CNDH role in supporting domestic and foreign observers “whose presence has been an added value to the assessment of the development of democratic practice in the country.” The Ministry of Interior has taken measures and provided information related to the electoral process, he noted, adding that data was provided to observers to simplify and facilitate their work, and enable them to perform their duties in the best conditions. Until the end of the election, the Ministry’s territorial services made sure that the neutrality towards all political parties was respected, adding that they ensured the right environment was set to maintain the credibility, integrity and transparency of the election process. Moroccan voters went to cast vote, exercising freely their constitutional right, he recalled, adding that the voting operation took place under normal circumstances, with the exception of a few isolated incidents that did not affect the progress of this operation. Voting took place in the total respect of the confidentiality of the ballot and the the fairness of the counting operations in the presence of the representatives of the lists of candidates, he concluded.