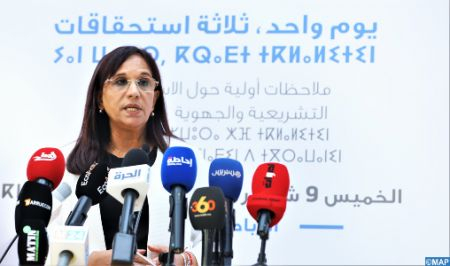 The September 8 elections were held in accordance with the procedures governing electoral operations and the observers of the National Human Rights Council (CNDH) have not identified major practices that have marred the transparency of this ballot which took place on Wednesday throughout the country, said Thursday in Rabat, president of the Council, Amina Bouayach. Speaking at a press briefing devoted to the presentation of preliminary observations on the elections of September 8, Bouayach said that the Council noted that the new legal provisions governing the ballot of 2021 have contributed to the expansion of political representation of society, through the electoral quotient, the strengthening of women’s participation via regional lists and the increase in voter turnout by holding three elections on the same day despite the context related to the pandemic situation. The Council also reported a drop in cases of violence recorded during the electoral campaign and during the election day compared to previous elections. While waiting to investigate these cases, to define their number and to take the necessary legal measures by the competent authorities, the Council condemned all the violent practices and insisted on the importance for the political parties to supervise their electoral campaigns while strengthening the capacities of their managers. The Council also called for expanding the exercise of freedom of expression that characterized these elections in both real and virtual public space, including for people calling for the boycott of the election, and to review the legal texts that limit this freedom. The Council also expressed its astonishment at the exchange of accusations regarding the use of money, in particular between four parties during the electoral campaign, said Bouayach, while stressing the importance of resorting to mechanisms put in place by law to strengthen election integrity indicators. According to the Council, 4,323 national observers were accredited in these elections, against 3,953 in previous elections, in addition to 152 international observers, while the number of the CNDH observers stood at 568 against 412 in 2016.