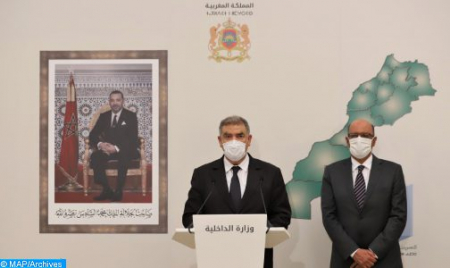 The National Rally of Independents (RNI) came first in the legislative elections held on Wednesday, winning 97 seats after counting 96% of the ballots, Interior minister Abdelouafi Laftit announced on Wednesday. The Authenticity and Modernity Party (PAM) occupied the 2nd place with 82 seats, followed by the Istiqlal Party (PI, 78 seats), the Socialist Union of Popular Forces (USFP, 35 seats), the Popular Movement (MP, 26 seats), the Party of Progress and Socialism (PPS, 20 seats), the Constitutional Union (UC, 18 seats) and the Party of Justice and Development (PJD, 12 seats), while other political formations share 12 seats, said Laftit who presented in a statement the provisional results of these elections that recorded a turnout of 50.35% at the national level, against 42% in 2016. Thus, the election of September 8 saw the participation of 8,789,676 voters, a figure up 2,152,252 voters compared to the elections of 2016, he said, adding that this is a very significant rate that reflects the great importance attached by the Moroccan citizen to this important electoral event and all elected institutions. The influx of citizens to the polling stations was, as usual, massive in the southern provinces where the turnout reached 66.94% in the region of Laayoune-Sakia El Hamra, 63.76% in the region of Guelmim-Oued Noun and 58.30% in the region of Dakhla-Oued Eddahab, a fact that is the irrefutable proof of the attachment of the citizens of these provinces to their Moroccanness and their effective involvement in the institutions of the country and in the development of the democratic process as well as the consolidation of achievements. In addition, the lowest voter turnout was recorded in the region of Casablanca-Settat with 41.04%, noted the minister, who was accompanied by minister delegate Noureddine Boutayeb. He said that great efforts have been made on the occasion of the operation of renewal of the electoral lists, the number of new voters that reached 1,806,724, bringing the national electorate to 17,509,316 voters. To bring the ballot boxes closer to the voters, 40,628 polling stations were created, framed by 4,000 central offices, an average of 10 polling stations for each central office, said the minister who emphasized the mobilization of political parties in the running for these elections, since 31 political parties were presented, including an alliance of parties created for the occasion. In this context, the number of lists of candidates presented at the national level, under all the legislative, local and regional constituencies has reached 1,704 lists with 6,815 candidates, i.e. a national rate of 17 candidates for each seat. Regarding women candidates registered for the election of members of the House of Representatives, they reached 2,329, or 34.17% of all applications, including 1,567 candidates for regional constituencies and 762 for local constituencies, he added, noting that 97 lists presented for local constituencies are led by women as heads of lists. Concerning the election of members of councils of municipalities and districts, the number of applications filed at the national level was 157,569, including 62,793 in the form of lists and 94,776 in the form of individual applications, i.e. a national average of nearly 5 applications for each seat, against 130,925 applications in 2015, up more than 20%, said Laftit. As for the number of female candidates to the councils of communes, it has marked a notable increase compared to the 2016 elections, he said, noting that the number of female candidates to the councils of communes and districts has reached 47,060, or nearly 30% of the total number of candidates. Regarding the number of lists of candidates filed for the election of members of regional councils, comprising 678 seats, it reached 1,123 with 9,892 applications, i.e. an average of 15 applications per seat, of which 3,936 are women (nearly 40%), said Laftit.