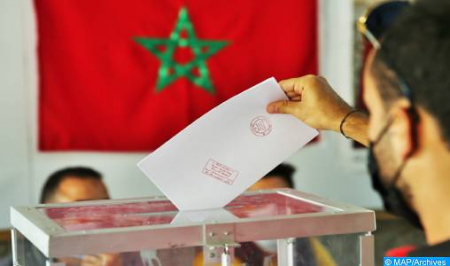 Several diplomatic representations accredited to Morocco welcomed the smooth conduct of the general elections held on September 8 throughout the national territory, seeing it as a “successful democratic exercise”. In tweets, these chancelleries congratulated the Moroccan authorities and people for the success of this triple vote, which recorded a voter turnout exceeding 50%, in the difficult context of the pandemic. Very impressed by the democratic conduct of the September 8 elections, the Embassy of Japan in Rabat commended the Moroccan people on this occasion. The British Embassy, for its part, expressed its pleasure to participate in the observation of these elections, saying it is ready to work with the next government to deepen the historical ties between the two kingdoms. The Embassy stressed the British government’s support for democratic development in Morocco over the past decade. “Despite the difficult health situation due to the Covid-19 pandemic, our Moroccan friends managed to hold a fair and transparent election campaign, and to ensure the free expression of the will of the citizens who went to the polling stations,” wrote, for its part, the Embassy of the Russian Federation in its tweet. After congratulating the Kingdom’s authorities and all the friendly Moroccan people on the occasion of these elections, the Russian Embassy expressed its confidence that the new House of Representatives as well as the government will continue to work for the continued prosperity of the Kingdom of Morocco and contribute to the development of Russian-Moroccan ties for the benefit of both peoples. The Italian Embassy in Rabat described the September 8 elections as “a great exercise in democracy,” wishing success to those elected. It highlighted, in this context, the spirit of partnership and fraternal friendship that unite the Moroccan and Italian peoples. In the same vein, the Philippine embassy particularly welcomed the high turnout recorded in these elections, expressing its appreciation for the aspirations of the Moroccan people for a strong and sustainable democracy. Several other diplomatic representations accredited to Morocco have also welcomed the good conduct of the September 8 triple vote. They are the Dutch embassy which said it was happy to see millions of Moroccans exercising their right to vote, and the Swiss Ambassador in Rabat, Guillaume Scheurer, who tweeted: “democracy in action”.