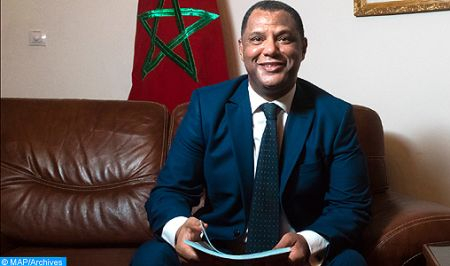 The Moroccan ambassador to Mali, Hassan Naciri, reaffirmed, on behalf of the diplomatic corps accredited in Bamako, the permanent commitment to intensify international efforts to support Mali in order to overcome this delicate stage and move forward on the road to peace and development. Speaking on behalf of members of the diplomatic and consular corps and international organizations in Bamako, during a meeting with the Prime Minister, Head of Government of Mali, Choguel Kokolla Maiga, in the presence of several members of the government of this country, the Moroccan ambassador expressed the wish to see the efforts of all the people concerted in the defense of the vital interests of Mali through consultation and permanent dialogue. “To meet the multiple challenges, Mali must bring a new dynamic in management,” said Naciri, noting that it would be wise to promote more choices based on a pragmatic and participatory approach without underestimating the constraints associated with this risky practice in a context characterized by a multiparty democracy. Peace, stability and social cohesion are at the top of all challenges, which is also reflected in the action plan presented by the Prime Minister, he noted. Although the transitional phase is not able to provide “a magic answer” to all the expectations and aspirations of Mali, the ultimate goal is to find the right path before the end of the current phase,” explained the Moroccan diplomat, wishing in this sense full success to the national consultation sessions to be organized by the government at the end of this month. He also expressed the hope that these days will be a strong moment to elaborate a consensual community project able to show the right path to the Malian government, as well as to international partners, highlighting the importance that future orientations include basic elements such as cohesion, political consensus, non-exclusion, human development and justice.