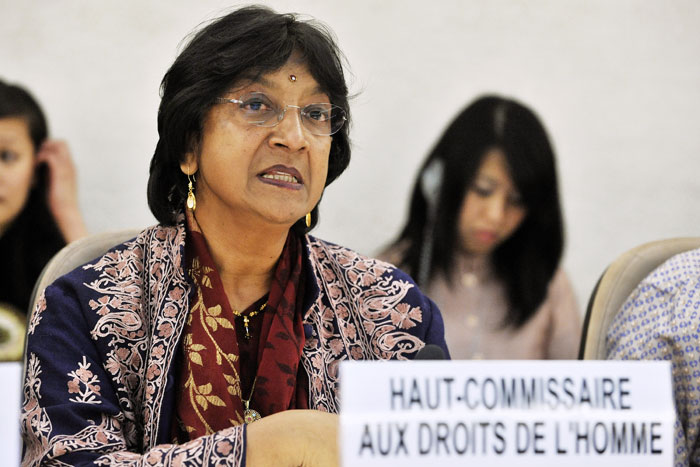 The United Nations High Commissioner for Human Rights (UNHCHR) seems determined to look more closely at many cases of violations of human rights and freedoms in the Polisario-run Tindouf camps that have been ignored for so long.
The HCHR, South African Navanethem “Navi” Pillay, actually announced while meeting in Geneva on Wednesday a delegation of Sahrawi activists that she was planning to visit the region to further her investigations into these abuses.
The Sahrawi delegation was made up of Dahi Aguai, chairman of the Association of missing persons at the hands of the Polisario, Mrabih Rabou Shaibata, chairman of the Regional Coalition for fight against poverty, and Mohamed Khaya, president of the Boujdour provincial social welfare association.
Navi Pillay told the delegation that she was following “personally” the cases of Sahrawi opponents, Mustapha Salma Ould Sidi Mouloud, who has been expelled to Mauritania, and poet and singer Najem Allal, who is constantly subjected to harassment and abuses in the Tindouf camps.

“I personally do not accept in any way that civilians are subject to violations or abuses,” said Navi Pillay, who asserted that OHCHR grants all due attention and interest to the case of Mustapha Salma.
Mustapha Salma, who has been banned from reuniting with his family in Tindouf, is currently staging a hunger strike to protest this inhuman ban.
Navi Pillay, who is holding the position of High Commissioner for Human Rights since September 2008, is readying to visit the Western Sahara and the Tindouf camps in order, she said, to assess the situation of human rights.
The delegation members surveyed before the High Commissioner “the ongoing human rights violations in the Tindouf camps,” insisting on the specific cases of Mustapha Salma and Najem Allal.
They also stressed the need for the OHCHR to intervene to “shed light on the fate of hundreds of Sahrawi victims of enforced disappearance, torture and serious violations of most basic rights.”
The High Commissioner assured her interlocutors that she was “carefully” following up the case of the singer and poet Najem Allal and all cases of disappearances in the Tindouf camps and pledged to respond to these grievances very shortly.