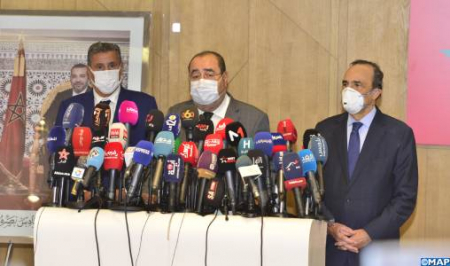 The newly appointed Head of Government, Aziz Akhannouch, held, on Monday in Rabat, a meeting with the first secretary of the Socialist Union of Popular Forces (USFP), Driss Lachgar, as part of consultations to form the new government. In a statement to the press, Mr. Lachgar said that this meeting was an opportunity to engage in “preliminary consultations on our perception of the situation at national and international levels, and on what concerns the Moroccan people and our country in this delicate situation.” He noted that this meeting “was also an opportunity to highlight the efforts made by the National Rally of Independents (RNI) and the USFP, in accordance with the High Royal Directions, to serve the country,” stressing in this regard that his party “is always ready to give more, in order to achieve the new development project of the Kingdom. On this occasion, Mr. Lachgar congratulated the Head of Government-designate for the Royal confidence placed in his person, and for having won the bet by occupying the first place in the September 8 elections. Akhannouch began, on Monday, consultations for the formation of the new government by two meetings with the secretary general of the Authenticity and Modernity Party (PAM), Abdellatif Ouahbi, and the secretary general of the Istiqlal Party (PI), Nizar Baraka. The USFP came fourth in the September 8 elections with 35 seats, behind the RNI (102), the PAM (86) and the PI (81). HM King Mohammed VI received last Friday at the Royal Palace in Fez, the president of the RNI, Aziz Akhannouch, whom the Sovereign appointed Head of Government and charged him with forming the new executive. “We will engage, from today, consultations with the parties, with which we will be in agreement in the future, for the formation of coherent, homogeneous majority with convergent programs,” said Akhannouch in a statement to the press at the end of the audience granted to him by the Sovereign. For his part, Rachid Talbi Alami, member of the political bureau of the RNI, said on Saturday that the appointed head of government will conduct consultations with all the parties which have obtained seats in the Parliament for the formation of a coalition in order to constitute the new government.