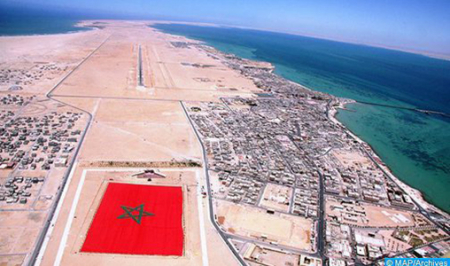 New countries have joined the Moroccan Territorial Integrity Support Group in Geneva which presented on Tuesday as part of the 48th session of the Human Rights Council (HRC), a declaration in which it reaffirms support for the full sovereignty of the Kingdom over its Saharan provinces. In this declaration read out by the Extraordinary and Plenipotentiary Ambassador and Permanent Representative of The Gambia in Geneva, Muhammadou M.O. Kah, the Group, which now brings together 34 States, welcomes the opening by many countries of Consulates General in the cities of Dakhla and Laayoune, which constitute a lever for strengthening economic cooperation and investments, for the benefit of local populations, regional and continental development. The declaration recalls that the Sahara issue is a political dispute handled by the UN Security Council which recognizes the preeminence of the autonomy initiative presented by Morocco as credible and serious for a final political solution to the artificial regional dispute on the Sahara. The resolution of this regional dispute will contribute to achieving the legitimate aspirations of the African and Arab peoples in terms of integration and development, a goal that Morocco continues to strive for and for which it is making sincere and continuous efforts, the same source pointed out. The Group recalls that Morocco has, for many years, been engaged in constructive, voluntary and in-depth interaction with the United Nations human rights system, in particular the office of the High Commissioner for Human Rights for the promotion and respect of human rights throughout its territory. It also recalls that the Security Council, in its resolutions on the Sahara issue, welcomes the role played by the National and Regional Human Rights Commissions in Dakhla and Laayoune and the interaction between Morocco and the mechanisms under the special procedures of the United Nations Human Rights Council. The Group stresses that the interaction of Member States with the Council and the High Commissioner must retain its bilateral character and be protected from any instrumentalisation, which generates counterproductive political debates within the Human Rights Council.