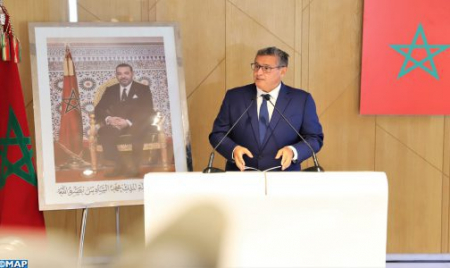 The first round of consultations to form the new government, which will be regularly carried out, was “important and fruitful” and the formation of the government majority will become apparent during the next week, said Wednesday in Rabat, the appointed Head of Government Aziz Akhannouch. Akhannouch told the media that during the consultations to form the new government, whose first round ended Wednesday, “meetings were held with several political party leaders during which each party presented its vision.” He stressed that “the Party of Justice and Development (PJD) had apologized, as has the Secretary-General of the Unified Socialist Party (PSU) Nabila Mounib, who informed me that she will be joining the opposition.” Akhannouch began Monday his consultations for the formation of the new government by meeting several political parties leaders. The National Rally of Independents (RNI) came out first in the September 8 legislative elections after winning 102 seats, followed by the PAM (86), the PI (81), the USFP (35), the MP (29), the PPS (21), the UC (18) and the PJD (13), while the other parties got 12 seats.