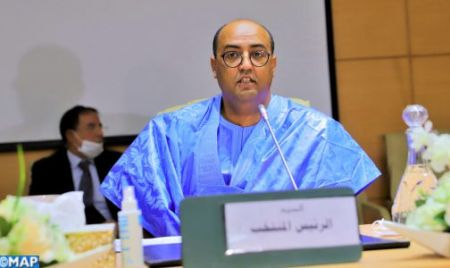 Sidi Hamdi Ould Errachid of the Istiqlal Party (PI) was re-elected, Thursday, president of the Council of the region Laayoune-Sakia El Hamra.  The only candidate for his own succession, Ould Errachid obtained 29 votes out of the 39 members of the regional council, while 10 members abstained. During a plenary session attended by representatives of local authorities, the election of the six vice-presidents of the Council was also held. They are Abad Boulahi, Habadi Fatima Bana, Aziza Abba, Lakhlifa Lambarki, Alia Houmani and Mohamed El Alami. Hassana Saadi was elected secretary of the Council and Mbarka Babba her deputy. In a statement to the press, Ould Errachid welcomed the climate that marked the election of the board, while expressing his thanks for the confidence that members of the board have placed in him. He also expressed the determination of the Council to continue the implementation of the development model of the southern provinces, launched in 2015 by HM King Mohammed VI, in order to meet the aspirations of the inhabitants of the region. The president of the regional council also stressed that the high voter turnout in the legislative, regional and communal elections of September 8 in the southern regions of the Kingdom proved once again the effective involvement of the population in the democratic election of its legitimate representatives, the decision-making process and the management of its affairs.