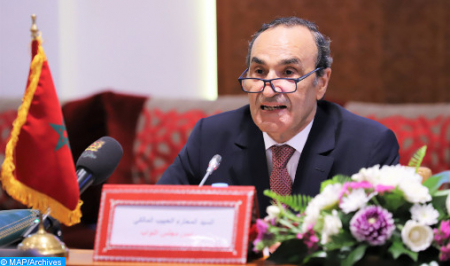 Speaker of the House of Representatives, Habib El Malki, and president of the National People’s Congress of China, Li Zhanshu, signed Thursday a cooperation agreement between the two legislative institutions, as part of the enshrining of their common will to consolidate bilateral cooperation and raise it to more solidarity and consultation. The cooperation agreement between the two legislative institutions establishes the principle of non-interference in internal affairs and respect for sovereignty and territorial integrity, which “represent an important pillar in the maintenance of international peace and security,” said a statement by the House of Representatives. The two sides are also committed, under this agreement, to implement the important agreement reached by the leaders of the two countries and develop mutual political trust, as well as to constantly assist each other on issues related to the fundamental interests and major concerns of the other party, the same source added. The two parties also agreed to improve communication between the two legislative institutions, to strengthen the ties of friendship and cooperation between them in the service of the common interests of the two countries and to boost cooperation both between the presidencies of the two chambers, as well as at the level of parliamentary committees, friendship groups and administrative services. They also agreed to share experiences, particularly in the areas of governance, administration, democracy and the rule of law, and to deepen cooperation on important issues such as public health, security, poverty reduction and sustainable development. Under this agreement, they agreed to intensify communication and cooperation at the level of international and regional parliamentary organizations and other multilateral fora in order to coordinate their positions on important issues and safeguard their common interests.