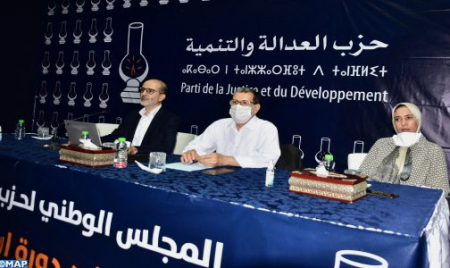 The National Council of the Justice and Development Party (PJD) held, on Saturday by videoconference, an extraordinary session dedicated to the discussion of a report submitted by the resigning secretary general of the party on the elections of September 8 and the preparation of the next extraordinary congress. Speaking to reporters, members of the PJD National Council said that this extraordinary session is being held in an exceptional context marked by the “great setback of the party” in the triple election of September 8, 2021. The meeting of the National Council is expected to approve the executive committee of the next extraordinary congress following the resignation of the general secretariat and to discuss the report of the general secretary on the elections of September 8, they said, noting that the PJD is in a new stage which requires renovation and self-criticism at all levels. According to the same sources, this extraordinary session, which is held at the initiative of the general secretariat, is an opportunity to assess the current situation of the party following the last election and analyze all elements in view of the next step. “The PJD is not only figures, but a political reality which embodies a political sensibility within the society and which will emerge from this stage stronger”, they added. The next congress will elect a new leadership capable of leading this exceptional stage, they pointed out. After two consecutive terms at the head of government, the PJD only won 13 seats in the legislative elections of September 8, ranking 8th. The day after the announcement of these results, the Secretary General of the party, Saad Dine El Otmani, as well as the members of the general secretariat submitted their collective resignation.