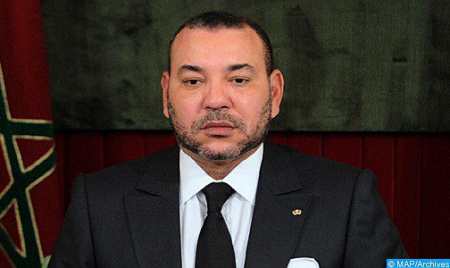 His Majesty King Mohammed VI has sent a message of condolences and compassion to the President of the People’s Democratic Republic of Algeria, Mr. Abdelmajid Tebboune, following the death of the former president Abdelaziz Bouteflika. In this message, the Sovereign says that he learnt with deep sorrow the news of the death of the former Algerian president. In these painful circumstances, HM the King expresses to the Algerian President, the family of the deceased and the brotherly Algerian people, his heartfelt condolences and sincere feelings of compassion. The Sovereign recalls the particular ties that bound the deceased to Morocco, whether during the periods of childhood and studies in the city of Oujda or even during the fight for the independence of Algeria, adding that history retains that the late Bouteflika marked an important stage in the modern history of Algeria. HM the King prays God to grant patience and comfort to the Algerian President and to the members of the deceased’s family, to have the late Bouteflika in his holy mercy and to welcome him in his vast paradise.