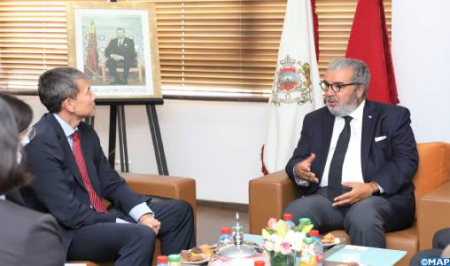 The ambassador of the Republic of Korea to Morocco, Keeyong Chung, welcomed, on Monday in Rabat, the successful organization by Morocco of the general elections of September 8, deeming it as an achievement for the Kingdom as well as for the whole region. “It is not an easy task for a country to organize elections in the devastating context of Covid-19 but we have all witnessed that Morocco has successfully completed its democratic process,” he told M24, MAP’s continuous news channel, following talks with the Director General of the Moroccan news agency (MAP), Khalil Hachimi Idrissi. “This is a great achievement not only for Morocco but the whole region,” said the diplomat, noting that the Kingdom has “overcome all obstacles and succeeded in conducting elections” in a region where several countries face “instability, whether internal or external”. In a message posted on its website last week, the embassy of the Republic of Korea congratulated the Kingdom on the successful organization of the September 8 election.