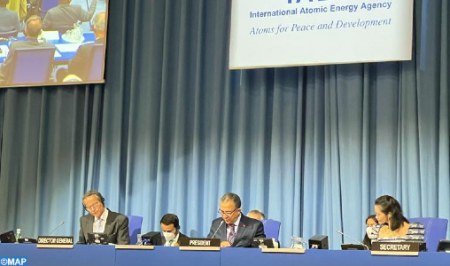 The 64th General Conference of the IAEA, whose presidency has been held over the past twelve months by Morocco, was marked by multiple and important actions and achievements related to the fields of science, technology, nuclear safety and security, as well as cooperation between the agency and Africa and national capacity building on the African continent. Speaking Monday at the opening session of the 65th session of the General Conference of the IAEA, Permanent Representative of the Kingdom to international organizations in Vienna, President of the 64th session of the Conference, Ambassador Azzeddine Farhane, noted that “the presidency of Morocco on behalf of the Africa Group was marked by the adoption by consensus of new resolutions”. He cited, in this regard, the resolution on the Zoonotic Disease Integrated Action Project (ZODIAC), which aims to mitigate future epidemics through the use of nuclear-derived techniques. Under this project, the Agency assists Member States to achieve the UN Sustainable Development Goals, including those related to good health and well-being (Goal 3), life on earth (Goal 15) and partnerships (Goal 17). This commendable initiative is actively and financially supported by Member States, including the Kingdom of Morocco, which has provided financial support for this purpose, he noted. These also include the resolution on the International Atomic Energy Agency and the COVID-19 pandemic, Farhane said, highlighting the proactive measures taken by the Agency in the largest practical initiative in its history to provide support to more than 125 countries around the world. “Through this initiative, one third of the Agency’s African member States have received valuable assistance in the use of nuclear-derived technologies, technical know-how and nuclear and radiological equipment for the early detection and prevention of COVID-19,” said the Moroccan diplomat. In addition, the resolution on the project to renovate the Agency’s nuclear applications laboratories in Seibersdorf (ReNuAL+) was adopted. This important project responds to the need to modernize the laboratories of nuclear applications to keep up with the increasingly rapid technological development, said Farhane, who highlighted the leadership role that these laboratories play on the international stage by forming global networks, such as those for animal disease control supported by the Peaceful Uses Initiative (PUI), the African Renaissance Fund and international cooperation, and many other initiatives. “In the current global context, it is important to highlight the contribution of these laboratories to the efforts of Member States in the fight against transboundary animal diseases and zoonoses,” he said, noting that Morocco is also among the Member States that have provided financial support to this major project. Moreover, during its presidency, the Kingdom, he added, ensured that the issue of the role of nuclear technology in the fight against cervical cancer was on the agenda of the General Conference by organizing, immediately after the first plenary meeting of the 64th General Conference, a high-level virtual round-table meeting on the theme: “The role of nuclear technology in the fight against cervical cancer in Africa: lessons from the past and prospects for the future”.