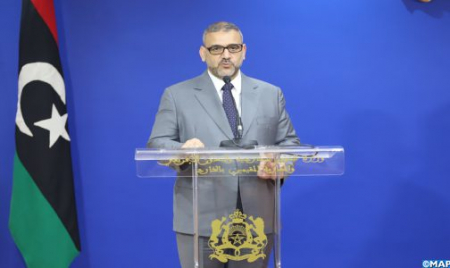 The President of the Libyan High Council of State, Khaled Al Mechri, on Tuesday welcomed Morocco’s efforts in reconciling the points of view of the Libyan stakeholders in addition to the Kingdom’s will to reach a political consensus with a view to resolving the Libyan crisis. These comments were made during a joint press conference held in Rabat with the Moroccan minister of Foreign Affairs, African Cooperation and Moroccans Abroad, Nasser Bourita. The High Council of State “strongly insists” on holding the parliamentary and presidential elections on December 24, assuring all candidates of its commitment to neutrality and independence, said the Libyan official. Al Mechri mentioned “concerns about the conduct of this electoral process and the acceptance of its results,” stressing that the Council, together with its local and international partners, is examining how to dispel these fears. In this regard, he affirmed that the Libyan High Council seeks guarantees concerning the acceptance of the elections’ results, including the presidential election, in addition to guarantees to ensure safe conduct of legislative elections, in order to allow the executive to perform its duties. The Libyan High Council of State is a key partner in the drafting of laws on the electoral process and seeks to reach consensus with the House of Representatives in this respect, he said, emphasizing that the areas of disagreement are “specific” and that a consensus can be reached soon. Al Mechri hopes the executive will be able to ensure optimal conditions for the conduct of these elections and make the necessary preparations in terms of logistics and security.