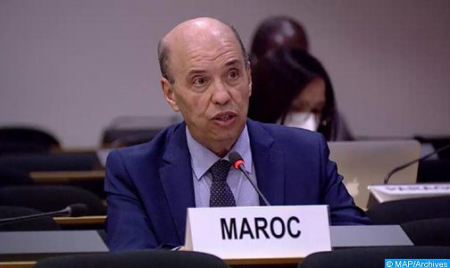 Morocco’s Ambassador and Permanent Representative in Geneva, Omar Zniber, chaired on Tuesday the 6th meeting of the Working Party on the Accession of the Union of the Comoros to the World Trade Organization (WTO), in his capacity as Chairman of the said Party. This meeting touched on bilateral negotiations on market access between the Union of the Comoros and WTO member states, examined the Working Party’s draft report and discussed issues raised by members. Furthermore, members discussed action plans to ensure the consistency of Comoros’ national laws with WTO agreements, in addition to next steps of the Party’s work. During the meeting, Zniber commended the efforts made so far by Comoros to reach an advanced stage in its negotiations for accession to the WTO, noting that Comoros’ accession remains one of the most advanced files. Zniber hopes to see this process completed by the end of next year. To this end, the Moroccan ambassador urged delegations to show flexibility and conclude negotiations that are still in progress, stressing the crucial importance of technical assistance to accelerate this process, particularly in areas where Comoros would need transitional arrangements. The meeting was attended by a high-level delegation from the Comoros, led by Mze Abdou Mohamed Chanfiou, minister of Economy, Industry and Investment and deputy-speaker of the Comorian Assembly. The Comorian minister reiterated his country’s commitment to rapidly conclude the accession negotiations, stressing that the country’s parliament continues to intensify the legislative agenda in line with the commitments made. The Moroccan delegation to this meeting, for its part, reaffirmed its strong support for Comoros’ accession to the WTO, stressing that the Kingdom is convinced this accession will positively impact the Organization’s economic and social development.